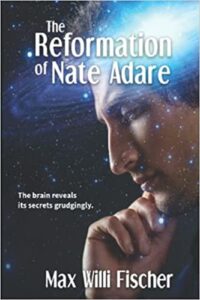 Nate Adare is one of those teenagers who enjoys spending most of his time in class playing jokes, making silly or rude comments out loud, and other such behaviors that fellow students find hilarious, but teachers generally find quite disruptive. He is not only failing in school, but he’s getting into trouble outside of it as well. Unfortunately, like many children and teens exhibiting this same behavior, Nate has several underlying issues. He has been raised for the past decade solely by a mother with a serious health issue, and he recently lost his alcoholic father, who died while serving time in prison for a crime he swears he never committed. These issues alone make it difficult for anyone to positively move forward and to succeed in life, but Nate has another issue that has recently been plaguing him.

The first incident, which ultimately landed him in the emergency room diagnosed with a concussion, occurred one evening when he woke up near a brickyard with a nasty headache, and a large bump on the side of his forehead. He only vaguely remembered what he was doing in the hours before the incident. While waiting to see a doctor, Nate reluctantly told his mother about what he believed was a strange and vivid dream he had shortly after waking up. Though he wasn’t a part of the dream, he remembered it was some time in 1979, and concerned two arguing men, one of whom he believed was a man from his father’s past. The second incident Nate experienced was unfortunately much more severe, and followed an accident with a snowplow he’d been operating one snowy evening. This one resulted in another head injury, but this time he didn’t wake up, and was officially listed as being in a coma.

In addition to Nate's "incidents," a few extremely bizarre episodes took place while Nate was unconscious. The first time in front of his mother, the second and third time also included his girlfriend, a doctor and one of his close friends. Incredibly, while still unconscious, Nate would suddenly sit up, eyes open, and start a prolonged stream of talking, often as if speaking through more than one person, all in a British accent. And as abrupt as he began talking, he would just as quickly stop and flop back in the bed, eyes closed. Doctors were at first both fascinated and stumped by this odd manifestation, but as time went by, the doctors began to think a bit differently, and way outside of the normal medical science box. But what could possibly be waking Nate from his coma and giving him the ability to speak? Was it something supernatural, or something locked deep inside his memories?

The Reformation of Nate Adare, penned by Max Willi Fischer, is a novel of speculative fiction that is not your typical science fiction novel filled with aliens, superheroes or even artificial intelligence. While the story may at first seem to be about an ordinary mischief-making teen, it takes an unexpected turn when Nate suffers two head injuries. What follows is an interesting twist involving past memories that keeps readers not only wondering what will happen next, but also wondering if Nate’s afflictions could be something that might occur in real life, and not just in this fictional story. Though the characters are believable, they could be expanded upon in order to improve the overall readability and enjoyment of the story. However, a bit of mystery and lots of food for thought keeps readers interested in continuing through until the end, despite some confusing areas between the characters, and an ending that may leave readers dangling and looking for more.

Quill says: Are you seeking a story that’s a bit different than your average sci-fi read? If so, you won’t want to miss the latest novel by Max Willi Fischer, The Reformation of Nate Adare.

For more information on The Reformation of Nate Adare, please visit the author's website at: www.maxwilli.weebly.com