The Princess and the Three Knights 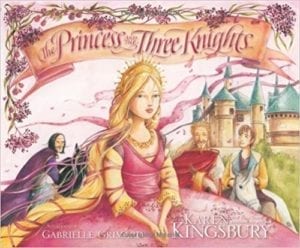 The Princess and the Three Knights

The princess was beautiful and when she passed by in her multicolored carriage a little girl rushed up with a bouquet of flowers while others stood by, waved or simply admired her beauty. She was of marriageable age and all the knights in the kingdom wanted her hand in marriage, some for her beauty, while others wanted her for her money. Her father, the king, "decided that only a knight who treasured the princess for who she was on the inside" would be chosen. He soon staged a competition to see who that special young man would be.

The knight chosen would have to be courageous, strong, loyal, kind and most importantly of all have a "deep faith in God." The knight who possessed all these characteristics would be very special and the only one worthy of the princess. The competition began and everything from races to essay writing were undertaken. In time the field was narrowed down to three knights. The final test would determine who the princess would marry. There was a treacherous cliff "overlooking the sea." The knights would pretend they were riding a horse while carrying the princess. The one who came closest to the edge would be the winner. The first knight tried not to show his fear, the second was imagining his riches and the third kept repeating to himself: "I can do everything through God who gives me strength." Would anyone plunge over the cliff? Which knight would win the hand of the princess?

This was a heartwarming Christian-based story about a princess, a knight and the "true meaning of love." The tale of the princess and how her father selected the perfect knight for her is not at all preachy, but rather has a lovely gentle Christian overtone. Before the story begins, we see the princess pensively looking out the window of the castle. First Corinthians 13:4, 7 is printed out (Love is patient, love is kind, etc.) The artwork is sweeping, beautiful and adds just the right touches to give it that fairy tale quality.

Quill says: This is a very popular book with young children and imparts one of those special lessons about love that we all need to learn!