The Place Where the Giant Fell 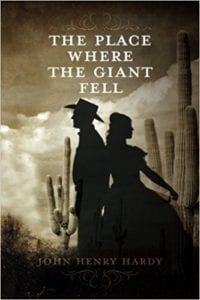 The Place Where the Giant Fell

John Henry Hardy sets his pen to paper and delivers an engaging tale of forbidden love in his novel The Place Where the Giant Fell.

Goldfield, Arizona used to be a thriving mining town at the turn of the century. Carrie Ann Benton was a young girl with her whole life ahead of her. Her daddy was a force to reckon with in the town. His name was Horace Benton and he was a racist, power-hungry Arizona Judge. He wanted nothing more than security and safety for his beautiful daughter, no matter the cost or consequences.

Perhaps the apple didn’t fall far from the tree given Carrie could be as headstrong as the father who raised her. She was mindful and conscientious of doing the right thing in the eyes of her daddy, but eventually, the heart wants what the heart wants. It would seem Carrie’s vision of happily ever after wasn’t quite what her father had in mind. Horace had designs that Carrie would eventually settle down and marry Earl Remington. His family came from fine stock and would certainly make things easier for Horace when it came to the next logical step in his political career. The only ‘mother’ Carrie ever knew was the hired help, Maria. She naturally assumed the role of ‘mom’ after Carrie’s real mom had passed away when Carrie was two years old. It wasn’t important to Carrie that Maria was Mexican and she wasn’t married to her father. She loved her as the only ‘mother’ she ever knew.

When Rodney Buchard asks Carrie to the school dance, it became abundantly clear to Horace Benton he had damage control to do and do it fast. No child of his was going to engage in the likes of some Mexican from the wrong side of town. His plan had been set long before Carrie knew anything about it. Carrie would marry Earl Remington; son of a rich cattle farmer and there was no further discussion to be had where this matter was concerned. Little did Horace know his daughter had other plans. It would involve a boy from the wrong side of the tracks, murder and a secret place to rendezvous. What began as innocence would change the course of the Benton family’s legacy.

John Henry Hardy takes an age-old premise of forbidden love and spins a tremendous tale of deceit and tragedy across the pages of The Place Where the Giant Fell. His descriptive prose of wide, open spaces of the Arizona dessert is captivating. The character development of Carrie and her forbidden lover, Rodney, sets the stage for the reader to willingly cheer on the underdog in hopes that true love will eventually conquer all. Mr. Hardy has a savvy style and is adept at planting seeds of action, danger and adventure to move the story along nicely. While this book is under 200 pages, Mr. Hardy hooks his audience at the onset and drives this story with a multitude of engaging scenery and dialogue. He knows his audience and speaks to them with confidence via his adept word placement throughout. I have not had the pleasure of reading any of Mr. Hardy’s work until now. However, having read this title, perhaps it is time to do so. Well done Mr. Hardy. I look forward to your next book.

Quill says: This is a story of forbidden love and the many consequences in pursuing it.