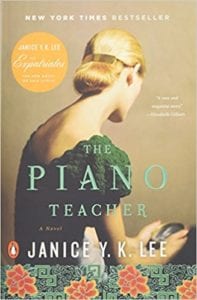 Claire was uncertain what she would do with her life and even marrying Martin had been somewhat of a lark. It was 1952 and as a British subject, she never thought she would end up in Hong Kong. Martin was working for the government and his job wasn’t much of a concern to her. What did concern Caire was what she would be doing in Hong Kong. Not long after she arrived Claire let it be known that she was available to teach piano.

The ten-year-old daughter of Melody and Victor Chen was a student of Claure's. Melody Chen was a taitais, but her cousin by marriage, Trudy, had her beat. Society was everything. Trudy Liang was an exotic oriental goddess, half Chinese, half Portuguese, a mixture that somehow drew people to her, but repulsed them at the same time. The Chinese didn’t like mixed breeds, but they tolerated her. Their cousin Domme was even more British than the British and somehow he fit into this unusual Hong Kong society where “everyone has to be friends or it gets very unpleasant.” Even a “rude English matron” like Edwina Storch had her place in the mix.

War quickly arrived on the scene and the foreigners were separated, the British becoming the most detested. “Rations” were soon translated to mean 500 calories a day. “Camp Stanley” quickly became a place where the high mucky Hong Kong players had to grovel and “become survivors or not.” The Japanese atrocities had begun. They got what they wanted quickly and cruelly. Someone held the secret of the Crown Collection, but who? Otsubo soon had his flunkies to grovel at his beck and call. The horror began to whirl around them, Claire wasn’t the only one who refused to notice things. Eyes were turned toward personal survival. Hong Kong would come back to its former glory, but who would come back with it?

This history of the Japanese invasion of Hong Kong tucked inside these pages is stunning. Lee captures the flavored essence of Hong Kong perfectly. It is not the buildings, nor things like scenery because we only read little things like “the peak” or talk of the rains and how the city remained dirty in spite of any watery deluge. What she does capture is the true nature of the human spirit during war and its lasting aftermath and effect on those who weren’t there or even in existence. I might warn the reader that if you are expecting a heated romance to show up within the first hundred pages, you’ll be sorely disappointed. This is a book that speaks to the hearts and minds of people and is what I call a “thinker.” After I closed the last page of the book and thought about it for a while, I was totally captivated by what was unsaid, but so obvious in Janice Y. K. Lee’s brilliant debut novel. I have been to Hong Kong and the caricatures of the people in the book are still there. They are everywhere.