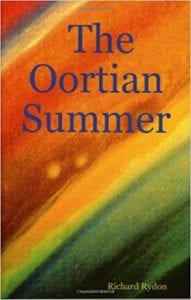 It is the spring of 2024 and Luper Beauchamps, a bright and promising Ph.D. candidate in Astronomy, is busy collecting data. Working at the Tektite Ridge Observatory, under the guidance of Professor Walter Hally, Luper is supposed to be working out monthly results for his boss. But instead the young scientist has been busy analyzing some interesting anomalies that he has discovered over the course of several months of data taking. Confrontation soon develops between Luper and Professor Hally, an insecure, overbearing, obnoxious and all-around nasty person.

Even with Professor Hally’s constant attempts to sabotage Luper’s research, the Ph.D. candidate discovers not one, but two comets. The second comet, huge, long, cylindrical, and rotating, is nicknamed the ‘spinning rod.’ All is going well at the research lab until Luper and his colleagues realize that the second comet has split in two and that both sections are hurling toward Earth. Will either (or both) sections of the comet, dubbed KOA-1 and KOA-2, slam into Earth, or will they pass harmlessly by our planet? That is the question that keeps readers glued to the pages of The Oortian Summer.

The concept of a comet crashing into Earth is certainly not a new idea, but The Oortian Summer offers much more than a simple comet plot. The researchers discover that the comets in question are made of iron and are having a harmful effect on the magnetic fields on Earth. Migratory animals that rely on those fields soon start showing navigation problems. It doesn’t take long for the scientists to realize that the two large comets speeding toward Earth may cause a devastating geomagnetic flip. But there are other problems too – computers at the lab keep crashing, leeks in the nearby greenhouse are growing at an alarming rate, and a couple of the older professors’ rheumatism has disappeared. Are these events related to the comets’ approach? There is plenty of mystery to solve in this book.

What sets The Oortian Summer apart from other science fiction novels is the interplay between the colleagues in the lab. Professor Hally, in the words of Luper, is a “dirty hypocrite,” and after all the terrible things he does to Luper, the reader will be rooting for the younger scientist. There are also the beautiful twins, Andrea and Andina, Dr. Tom Green who comes to Luper’s aid again and again, the bumbling post-docs Lex and Briny, Panthus, a fat and lazy cat, as well as several other notable characters. The way this mismatched group interacts as they work in tight quarters in an observatory is perhaps the highlight of this book. The author has created a group of very real characters, most of whom are quite likeable, while a few have no redeemable characteristics.

The author is a retired scientist and his scientific background shows through in his story where the action closely mirrors that in a real life laboratory. Unlike many novels where the characters come to a solution quickly, the researchers in Rydon’s story struggle with the science and math behind the problem. There are plenty of false starts, wrong solutions, and miscalculations. Following along as the scientists work out the problems associated with the comets keeps the action going at a quick pace.

Quill says: The Oortian Summer is an entertaining science fiction novel with plenty of real science thrown in to keep the action realistic.