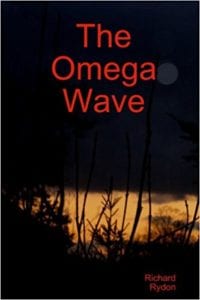 We first met Luper Beauchamps, a promising Ph.D. candidate, in the science fiction thriller The Oortian Summer. The newest offering from Richard Rydon, The Omega Wave picks up where the first book ended. Luper and his beautiful girlfriend Andina travel to the United States to work at Wes Lane Inc., a Silicon Valley research corporation. The two work in separate groups, Andina in nanofabrication and Luper in developing chip interfaces. While Andina is energized, Luper is quickly bored. His boss moves him to a unit testing the effects of electromagnetic radiation on the performance of fuzzy logic components. Unfortunately, Andina and Luper’s relationship suffers from their separation and Andina decides to return to Sweden.

Luper is soon moved again, this time to a team working on cutting edge research in neurochips. His new research group consists of Frieda Delvin, a young, very enthusiastic IT assistant and Rose, a technician in the lab. Under the tutelage of their boss Quade Barras, the team is quickly settled and making good progress. Using brain tissue from the local hospital morgue, they encourage neurons to make connections with other neurons. Their hope is to eventually create functional, “intentionally conscious entities.” Before Luper joined the lab, the neurons would do well for a short period, but after about 10 weeks they’d start to decay. When Luper’s research leads to a breakthrough to keep the neurospheres (the connected neurons) alive beyond the 10 weeks, progress escalates. But soon the team begins to suspect that Quade, and Der Bandon, a coughing, phlegm swallowing brain biologist, are up to something.

As research progresses, suspicions continue to rise. With the handling and accounting of the neurosphes carefully controlled by Broc Fulton and his Ethics Council, the valuable research material should be secure. But Luper, Frieda, and Rose are not so sure and they share their suspicions with Broc. Did Quade take a “living” chip, pretending it had deteriorated, and remove it from the lab? If so, why? And where did he take it? As they continue to poke around the area, the group stumbles upon the Fort West Wing Army Camp and the Central Asian Embassy. Is there something unscrupulous going on at the two facilities?

The Omega Wave asks the reader to tackle a fascinating philosophical question: should science probe the possibility of creating robots that are intentionally conscious and if so, how might they be used? Rydon imagines a world where the intelligent neurospheres in question are used by “minders” (people trained to use the neurospheres to read minds) to delve into the thoughts of enemy combatants and aid in torture; all in the name of science and furthering a country’s security needs. How will the scientists doing the research handle the moral dilemma when they discover the truth?

The author makes no secret of the fact that The Omega Wave is heavy on the science aspect of science fiction. From the first page, science, and the terminology that accompanies the discipline, is abundant. This will undoubtedly appeal to those well-versed in the various sciences but may prove a challenge to people simply looking for a great story.

The Omega Wave is not a light read. Indeed, there are spots where the plot takes a back seat to the science and the story comes to a halt as the reader is given a science lesson. Dialog too, suffers in places. When Luper and Frieda discover a link between fragrances and the chips ability to communicate, Rydon devotes a full page to a table that identifies various scents and their chemical compounds. In other places, in an attempt to help the “science challenged,” conversations between characters become clunky as the real reason for their dialog is to explain the science to readers. This attempt to enlighten the reader results in language a scientist would be unlikely to use with colleagues.

Despite the somewhat overabundant use of science, The Omega Wave offers an intriguing read. With the development of intentionally conscious entities, espionage, torture, kidnapping, escape attempts, and characters whose motives are unclear, this story offers a thought-provoking read. If you’re unsure of your ability to get through the technical jargon, start with The Oortian Summer, it is lighter on the science, will give a good introduction to the characters, and encourage you to continue your reading with The Omega Wave.

Quill says: If you like science in your science fiction, then sink your teeth into The Omega Wave and be prepared to ask yourself some hard questions about creating intentionally conscious entities.