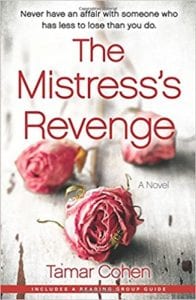 Told by the main character, Sally, through entries in a journal that her therapist believed would be helpful - the reader is presented with a story that focuses on the incredibly high costs of having an illicit affair.

Sally is a woman who ‘lives’ life in a cubbyhole. Her job is mundane and boring, but she does have two children she loves and a husband named Daniel. This trio has always been the most important part of Sally’s life. Daniel is a nice, calm, harmless man who is certainly a good father, yet doesn’t exactly offer much in the way of excitement.

There came a time when Sally and Daniel became friends with a lovely woman named Susan and her husband, Clive. Clive is a wealthy man, but not exactly the ‘Brad Pitt’ type. In fact, when Sally first meets Clive she observes him as a short, stocky man with a Chinese dragon tattoo on his forearm. Little did Sally know at that time that she would one day be sending Clive one hundred emails a day trying desperately to get him to speak to her again.

At the beginning, the emails were scattered as Sally and Clive became friends and spoke about various life events. In fact, Clive joked that Sally was the first female friend that his wife Susan even allowed him to have.

Unfortunately, for Sally, she found something in Clive she couldn’t find in other areas of her life, which put her on the path of self-destruction. Believing what Clive actually said was her downfall, as Sally and Clive began an all-out affair which was exciting, romantic, and…soon over. Although Clive walked away and went back to the arms of the wife he loved, Sally could barely get up in the morning. She became obsessed. She began to follow Susan around and have lunch with her, trying to get the latest information about the man she thought she loved.

Susan is a kind woman and deals with Sally well, yet even she, after a while, feels as if there’s something incredibly wrong with the woman. At home, Daniel suffers as he watches Sally turn into a woman he’s never met before. As Sally grows even more cold and distant toward Daniel, her daughter soon begins to despise her, and Sally even forgets her own son’s birthday. Literally, all she can concentrate on is Clive…what he’s doing…what he’s thinking…

Sally becomes so obsessed, in fact, that she soon finds people following her; threatening letters begin to amass, and her car window is smashed by a brick. A warning from Clive, perhaps?

With the twists and turns - and a very surprising ending - this book takes a good long look at obsession and the exacting of revenge.

Quill Says: A good debut. Although there were slight 'reminders' of Fatal Attraction, Sally is a bit mediocre when it comes to being an obsessive woman on the edge.