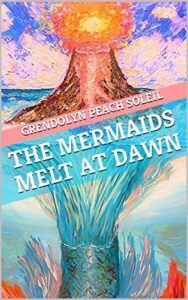 A young Cajun boy, deprived in almost every way except in his mysterious heritage, follows the tales told by his grandfather to find the marvelous island of mermaids, in this richly woven fable by Grendolyn Peach Soleil.

The tale begins in the swamplands of Acadie, where many displaced French people migrated when expelled from Canada in a move known as Le Grande Dérangement. There a little boy named Rok Lejuene is growing up in the forests and waterways. Rok, son of a woman who “died of the scarlet curse” after raising the infant in a brothel, and a disgraced father who committed suicide, is taken in from age 6 by his grandfather, or bon-papa, Christophe, a third generation Cajun. His grandmother, or mémère, Amandine, comes from a lineage that includes not just French royalty, but also a mythological creature, Mélusine, cursed with a half human, half fish body. Amandine’s fish form reappears every Saturday evening, when she must bathe alone. The couple never married, believing that such ceremonies have no meaning compared to true love. Because of his father’s suicide and his grandparents’ unusual beliefs, the boy is prevented from going to school. Inheriting his father’s knife, Rok becomes a bold hunter who enjoys his solitude.

Amandine teaches Rok the art of bee keeping while Christophe entertains him with tales of a far-off island, Barbiche, where a group of shimmering mermaids, a coquillage, can fulfill whatever wish a man might have – but only one - if encountered before daybreak. At dawn, they melt away. After his grandparents pass on, Rok journeys to Barbiche, where he will learn of ancient myths linking Poseidon and other beings in the Greek pantheon to the magic island. He will also see mermaids and fall desperately in love with one of them, the beautiful Apollina. She, with her deeper intuitions, can see that Rok is an innocent soul, predicting that he will not live long enough to become her true love.

Soleil, who has a doctorate in clinical psychology, writes, she says, as medicine for her soul. She has mined similar rich veins of fantasy, mythology and the merest touch of realism in her previous work, Limbo Jubilee. And in The Mermaids Melt at Dawn, she has fashioned the story as a series of “yarns” purportedly arising out of Arcadian culture. Soleil has a way with both French and American folk argot. The intermingling of Greek myth, European history and scenes from the Louisiana swamps is captivating, especially when combined with Soleil’s vibrant imagery of the loves and lusts of mermaids and the men they enchant. Her adult fairy tale borders on poetry, and will attract readers with imaginations as unfettered as her own.

Quill says: Read The Mermaids Melt at Dawn for fact, fiction, and fascinating fable that almost requires a genre of its own. Once you pick it up, you will want to hang on to the stories until all the threads are connected.

For more information on The Mermaids Melt at Dawn please visit the author's website at: www.grendolynpeachsoleil.com