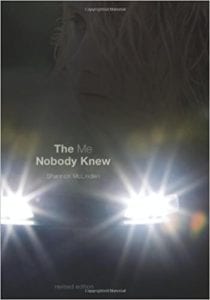 Shannon was so utterly miserable that she cried as she "shoveled Fruity Pebbles into [her] mouth," yet even the closet people in her life didn't seem to recognize the pit of despair she had fallen into. Her parents didn't notice. Her brother couldn't care less. Her best friends Dina, Kathie, and Aimee had no clue that she was so depressed that she didn't want to live any more. Not a soul in Coon Rapids, Michigan heard her inner voice cry out, "I hate this, I hate this, I hate this. I don't want to live this life anymore." On one level it was no wonder because by the time she was in seventh grade she had begun to smoke, to drink and despair, She was spiraling into a pit that she couldn't seem to escape.

It was a hidden madness because Shannon actually did well in school and had many friends. She claimed "Yes, I could fit in everywhere. Yet really I fit in nowhere, because I could never be the real me." But who and what was she? Would anyone be able to find her? She stepped off a curb in hopes of being hit by a passing car, but a friend pulled her to safety just in time. She lashed out at her parents. Her world was falling apart and she did know how to fix it because when she claimed, "you don't enjoy waking up," how could she remedy anything, let alone live a normal life? Rock bottom was beginning to look like a mountain peak and even the psychologist her parents sent her to didn't seem to be able to help. How ... how was she going to make it out of this abyss and live for the first time in her young life instead of hiding from everyone behind an idiotic façade?

This is a startling story of depression and insecurity than many `tweens and teens may relate to and take solace in. There are many problems that young people can relate to in this book from substance abuse, anorexia, sexual assault, and poor, but avoidable parental relationships, brought on by inner turmoil. The flow of Shannon's story is excellent and easy to read, but once she resolved to mend her ways and attempt to move beyond her substance abuse there was no bridge that indicated how she accomplished this amazing feat. Once she resolved to quit drinking and to move forward I would have liked to read a bit more of just how this courageous young woman accomplished it. This book will be a great encouragement and help many `tweens and teens who may find themselves in similar circumstances. In the back of the book is a lengthy and thorough discussion guide for those who wish to delve further into the angst many young women find themselves unwittingly immersed in.