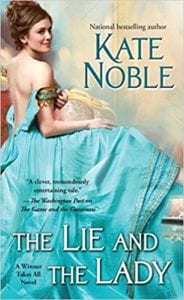 Leticia “Letty” Price wanted it all. Being the daughter of a miller wasn’t going to get her anywhere fast. She did manage to become Lady Churnzy until an unfortunate accident made her a widow. The Earl of Ashby had won her heart and her body literally throbbed with desire for the man. It was everything Letty had ever dreamed of...everything, but she hadn’t counted on one thing. That thing was John Turner. Turner was nothing more than one big lie, a man who’d won a bet. The wager was a foolish one, but he’d played the part of the Earl so well the Countess had believed him. The title, the money, the life of luxury was dashed in a moment’s time in her boudoir. The Lie had begun and undoubtedly Letty would have trouble living this one down. Through no fault of her own, she would be disgraced should anyone find out. There was nothing to do, but take flight, far away from anyone who knew.

Paris. It would be a wonderful place to start her life anew, but selling her remaining bits of jewelry would have to sustain her. No one would ever learn about the Lie, least ways Sir Bartholomew Babcock wouldn’t. There was no falling in love, yet she lusted after the life he had to offer her. Sir Barty was so much older than Letty was, but was it of any concern to her? No. She would marry once again and would even have a stepdaughter, Margaret to dote on. Letty admitted to Barty that “the man in question was playing me false.” All her cards were on the table with the admission of her past sins. Nothing could possibly go wrong, could it? It could and it would.

Letty had “fallen into disfavor with the women of Helmsley in less than a sentence.” Her relationship with Sir Barty’s daughter, Margaret, fared little better. There were secrets and lies in Helmsley, but the Lie was a well-known fact to some there, including the miller. Helen Braithwaite Turner was a good friend to her fiancé as well as mother to none other than John, the man whose passionate touch set her very being on fire. The banns were being read in St. Stephens, a place her past could come back to haunt her. John Turner was a man who ignited her soul, but there was yet another who could burn it. Palmer Blackwell knew everything. The secrets, the Lie, and the lies...

This is the type of romance that can keep anyone captivated from the first page to the last. I haven’t read a romance in years, but would definitely pick up one by Kate Noble again. There’s a lot more than meets the eye in The Lie and the Lady, a romance that actually kept me wondering what would happen to Letty next. The coincidences were plentiful, but ones that were totally unexpected. Letty, of course, was a gold digger that could rival Sister Carrie. It was onward and upward, but with each turn of the page there seemed to be yet another obstacle in her way. The characters were quite well-developed and I became interested in the subplot with Margaret and the swirl of attention surrounding her. There wasn’t enough steam in the book to power up John Turner’s grain mill, but plenty of intrigue and mystery to make this tale a winner.

Quill says: If you want a romance with substance, subterfuge, and oh-so-sexy undertones, Kate Noble has penned a romance with all of those qualities plus some!