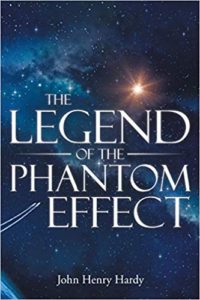 Harpie Colcek’s career as an investigative reporter had brought him to the scene of many intriguing stories including murders, disappearances, fraud and things of that nature. However, when Harpie gets a call on Christmas Eve to investigate a mysterious aircraft sighting, he is mostly perturbed that he has to drive to a government base instead of spending time with his family. After going through a security check, Harpie is informed that this unusual sighting has been named the Phantom Effect and only happens at 11:55 every Christmas Eve. It simply appears as a small blimp on the radar but when investigated further no one can determine exactly where this craft is landing, or how it comes and goes without being detected. Nothing more than the blimp has been seen for the past few years.

Suddenly the story takes a dramatic turn when Harpie is told that some in this government facility believe that these sightings could be proof of extraterrestrials coming to Earth. With the way the craft secretly lands and takes off from Earth the government officials begin to speculate that perhaps they were implanting weapons to overthrow the human civilization. For what other reason would they have for being so secretive? Curiosity has now taken a hold of Harpie and he wonders at the possibilities of what could be lurking in outer space. However, he has little time to contemplate that question as two FBI agents interrupt his interview and inform him he has been shown classified information he was not allowed to see and now must be monitored by the U.S. government. Confused, Harpie tries to explain that he was invited to the facility to do a story, but soon learns that the information about the facility was leaked without the president’s approval.

Harpie’s world is soon turned upside down as everything he and his family do is now being monitored. For a full year Harpie lives with the constant surveillance but finally after keeping his word not to tell anyone about what he saw in the government facility, the FBI agents relax their protocol and stop bugging the phones at Harpie’s house. Even though Harpie had kept quiet about what he witnessed at the government facility, there was still a nagging feeling he absolutely could not shake about this Phantom Effect, as his investigative reporter side would not let him squelch the curiosity about extraterrestrial life. In a bold move he decides to inform his wife about what he saw and then take a trip to a place outside of Lubbock, TX which he believes could be the place the craft was landing every Christmas Eve. He knows this is a huge risk for if the government finds out what he was doing he would go to prison, but for a chance to actually see extraterrestrial life he decided it was worth it.

After reading the synopsis of this book I first thought the story would follow a similar line to other alien stories with the theme of aliens coming to invade Earth and wipe out humans. However, what I found with this book is a completely different view on extraterrestrials coming to Earth. Author John Henry Hardy writes from the perspectives of many characters, both humans and extraterrestrial, which allows the reader to experience a story from a side not usually seen in this type of storyline. It was refreshing to read a story about space that differed from the typical alien invasion theme, and I found it quite intriguing.

Quill says: An intriguing story that takes the thought of extraterrestrials to a "whole new level."

For more information on The Legend of the Phantom Effect, please visit the author's website at: jhhardy.com