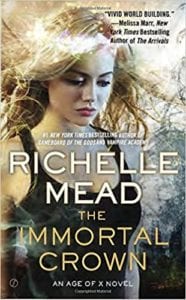 After the unbelievable and once thought impossible things that have happened since Justin March and Mae Koskinen met, they now know that anything could happen. Since discovering and bringing down a dangerous religious cult together and Mae freeing herself from the clutches of an evil God, these two are suddenly thrown into another overwhelming mission.

Lucian Darling, who is running for one of the two highest offices of the Republic of North America (RUNA), has asked Justin and Mae to accompany him on a political trip to their neighboring country of Arcadia. Lucian believes this will be a perfect opportunity to negotiate peace between the two countries and illuminate him in a favorable light when election day comes around as the people will see him taking action rather than just giving speeches. While in the RUNA religion and politics are strictly separate, in Arcadia religion is the driving force in politics and this fact has caused the countries to erupt in terrible battles as each country believes they are the superior people.

In addition to the different religious and political views in these two lands, women are seen as property and given no rights whatsoever in Arcadia. To ensure that peace comes of this trip, all of the women from the RUNA are told to behave in a manner resembling the Arcadian women, which is somewhat of a challenge for Mae and the other women accompanying this political group. However, to make sure that this trip is safe for everyone, Mae and the other women are quick to comply. As Justin works to figure out exactly what religious threats are at work here Mae finds herself tied to another quest. In a bizarre vision Mae is shown that her long lost niece is being held in Arcadia where her captors are planning to sell her when she comes of age. Knowing that this may be the only chance she may ever have to save her niece Mae takes a huge leap of faith and embarks on a rescue mission that she is not entirely sure she will be able to survive without divine help.

This is the second installment of the Age of X series by Richelle Mead and before jumping into this book I first read Gameboard of the Gods and was completely hooked from the first page. I quickly read through the first book in two days and immediately started The Immortal Crown and was not disappointed in the least. This second book picks up right where the first left off and continued to entice my imagination with every page. Richelle Mead has an amazing way of creating characters that demand respect but are also relatable on an intimate level. Both the characters of Justin and Mae have undeniable courage and strength but they also have a need for one another and that combination makes for a breathtaking read! At the end of the story Mead left with a tantalizing cliff hanger and I sure hope that a third installment is on its way to continue this wonderfully written and intriguing story.

Quill says: This is a story that makes me say, 'this is why I love books!'