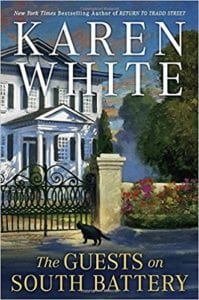 Melanie Trenholm lives in Charleston, South Carolina with her husband Jack, her stepdaughter Nola, and her twins Sarah and JJ. Although on maternity leave, she is ready to go back to her job as a real estate agent. And while it may seem like she leads a normal life, she has an ability that many do not know about. Passed down through her family, Melanie is able to see and speak with the dead.

On her first day back to work, things do not go as planned. Melanie starts her day with her alarm clocks mysteriously stopping at ten after four in the morning and a mystery phone call with no one on the other end. Since she doesn’t believe in coincidences she knows that these occurrences have something in common, but she doesn’t know what. When she gets to work, after meeting the new receptionist, she finds that she already has a new client named Jayne waiting for her. After talking with Jayne, Melanie learns that her client has inherited a house from a prominent Charleston family. For Jayne, having been in and out of foster care her whole life, inheriting this house is a complete shock. Melanie agrees to take on the listing and offers to help Jayne figure out why she would inherit this house. While they are discussing the house, Melanie learns that Jayne is looking for a job as a nanny. Since her and Jayne agree on numerous parental topics, Melanie agrees to hire Jayne.

Although Jayne does not like old houses, she ultimately decides that she should renovate the house before she sells it. Since the work is being done by one of Melanie’s friends, Melanie agrees to help oversee the renovations. After just one visit to this house, Melanie’s sixth sense kicks in and she realizes there is more to this house than she thought. As odd things begin to happen every time Melanie is there she realizes she has to find out what really happened all those years ago and why Jayne inherited this house in the first place. With the help of her husband Jack, Melanie digs into the history of the house. As Jack begins to learn about the previous family, he finds that there is more to the story than people thought and that it involves Melanie and her family as well. Ultimately Melanie has to decide how much she is willing to do for a complete stranger.

The Guests on South Battery is a very captivating book. Each chapter leaves you wanting more - it is very hard to put down. Every detail and scenario that plays out in the book is very descriptive, making you feel like you are actually there and experiencing everything for yourself. Along with the mystery aspect, The Guests on South Battery provides great detail about Charleston. With the scene being set in the historic district of Charleston, the book is written in a way that shows just how much history is there.

Quill says: If you are looking for mystery with guests from the other side, as well as a story with plenty of historical mentions, this is the book for you.