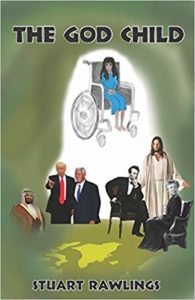 The third in a funny, fast moving series, Stuart Rawlings’ The God Child shines light on some of our most famous historical figures, as they take a stance against some of our most scurrilous moderns.

The story opens with a gathering led by a little girl in a wheelchair. Through her mysterious powers she has brought back to life the following cast: Jesus, Mohammed, Buddha, Moses, Jefferson, Lincoln, Eleanor Roosevelt, Hitler, Joan of Arc, Einstein, Michelangelo, Beethoven, H. G. Wells, Margaret Mead and Freud. She will give each participant money and gear for a one-month mission to “explore this modern world, interact with others and do whatever you want to do…” and report back to her. Jefferson, Lincoln and Roosevelt visit their American homesteads, then cast their attention on President Trump; Hitler and Joan of Arc will visit Hitler’s old home in Bavaria; Wells and Einstein aim for Geneva; Shakespeare, Michelangelo and Beethoven set their sights on an arts tour of Europe; Mead inveigles Freud to accompany her to the South Pacific. The four religious icons have separate agendas: Moses will go back to the Holy Land; Mohammed will visit places where Islam’s teachings have gone astray; Jesus wants to confront evangelical American sects; Buddha will go to Myanmar.

So the adventures begin, with Hitler and Joan anonymously settling down on a little farm until his identity is discovered and the pair is arrested. Freud and Mead, now lovers, seek to aid the despised Rohingya people with help from Buddha. Mohammed takes on oppressive leaders in Syria and Saudi Arabia, and he, Moses and Jesus will meet up in Damascus. With Wells as his publicist, Einstein sacrifices his newfound life to illustrate the truth of global warming. Much of the book’s plot centers on advances by Jefferson, Lincoln and Roosevelt to reform Donald Trump, shown initially as “an ignorant, narcissistic, amoral bully.” Among the scattered illustrations, his face appears many times. Trump learns from his resurrected counselors that he can gain more support by following a less self-centered agenda.

Rawlings is a highly educated author who teaches others. He has authored twenty-three previous books along with other media productions. His writing has bite as well as humor. The scenes involving Trump are hilarious, but with an aura of authenticity. The reader will wish this volume, or perhaps the whole series, could be made into a cinematic production, with enjoyably conflicting input about what actors/actresses would play which roles. Rawlings offers a somber ending, while leaving a crack in the door for a future sequel.

Quill says: There is enough good-natured fantasy to keep the reader rolling along with Rawlings’ fertile imagination, and enough factual, historical material to raise some philosophical questions.

For more information on The God Child, please visit the publisher's website at: www.sierradreamspress.com