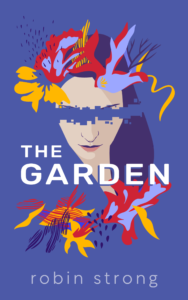 Creativity maven and debut author Robin Strong has constructed two realities that intertwine in this vibrant novel for young adults, in which a young woman’s ambitions collide with events in a virtual world where she will encounter her deepest fears – and overcome them.

When Lucy Fernández was in 4th grade, she saw the school bully tormenting a rather odd, new boy named Ian. For reasons she can’t fathom, since she is the brainy, not scrappy, type, she aggressively defends Ian, and a friendship is born. The relationship between them will flourish in the final year of high school, when she is grappling with her failure to win first place in a crucial TechEd competition that would have all but guaranteed her entry into MIT – her childhood dream. Ian asks her to visit him at home and reveals his own potential entry in a tech competition: he has invented a virtual reality so life-like that Lucy is immediately enchanted by it. The scenery is blissful and she can be as free there as she wishes. The people that Ian has concocted for his world, though, are rather mechanical in their actions and relationships, and this is a flaw that the two teens strive to improve after Ian invites Lucy to partner with him on his project. One important influence on Lucy is her anthropology teacher, Ms. Howell, who sees a bit of her younger, not always successful, self in Lucy and privately urges her to find courage in the challenges that failure can invoke. Lucy develops a personal connection with one virtual girl, Evie. As the virtual world must suddenly overcome the machinations of an evil godlike figure, the dangers to its existence become Lucy’s call to fight in their defense. Pushing Evie to unaccustomed heights of boldness and rebellion will energize Lucy’s own private struggles with self-esteem.

Strong, a freelance editor and Tedx speaker, offers this engaging tale, sure to capture an audience of young readers, and particularly young women, with sharp minds and a sci-fi/fantasy/techie bent. The story has powerful cinematic possibility, with the two teens’ visits to their co-created universe offering wide scope for excitement and change. The rebellion that arises in the VR realm as a result of human tampering is credible, harrowing and ultimately gratifying. Events are clearly depicted and easily envisioned, the characters well drawn and memorable - geeky genius Ian, Lucy’s wise mentor Ms. Howell, and of course Lucy herself, driving herself to impossible perfection, crying in frustration when she misses the unattainable mark, and rejoicing when she finally gets it right.

Quill says: The Garden, geared to a youthful, imaginative audience, features swift scene changes, teen torments, the mysteries of VR technology, and even a small sliver of romance. So compelling is Lucy’s story that readers may well pester Robin Strong for a sequel to expand on her next adventures.

For more information on The Garden, please visit the author's website at: www.robinstrongbooks.com