The Fox and the Hen 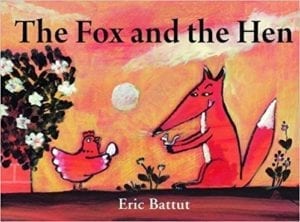 The Fox and the Hen

The sun was rising in the east and birds were flying overhead as Henrietta Hen stared at an egg on the ground. She was mystified at her first egg, but when sly old Red Fox came along and said, “What a nice egg!” and offered to swap a big old worm for it she agreed. When the other farm animals got wind of what happened they were very upset, especially Goose. She said, “Oh, Henrietta, your egg is precious.” When she told her the fox was going to eat it Henrietta was upset. Cow and the other animals were determined to get that egg back.

Henrietta went off with Rabbit to offer some seeds in trade. No thanks. Red was only interested in eating a scrumptious hard-boiled egg. Next up was Goose and her offering of some lovely white feathers. No thanks. Red was only interested in a “soft poached egg.” Red Fox was looking quite smug and surely was going to have breakfast soon. Goat came along with goat’s cheese, Sheep showed up with some wool, Pig offered up some marmalade, and Cow brought some milk. No thanks, no thanks, NO thanks. Red Fox glanced lovingly at his egg trying to decide whether he wanted an omelet, a scrambled egg, a fried egg or a soft-boiled one. Was Henrietta ever going to get her precious egg back or was Fox going to slurp it up for breakfast?

The tale of Fox and Hen has that nice fairy tale quality that will delight your little one. Poor little Henrietta was no match for the crafty old fox, but when the group got together and put on their thinking caps they found a solution. I liked the way the simple, but very appealing artwork, caught the feelings of each animal in their eyes. For example the pig had a hopeful look in his when the marmalade was offered and the cow had this “you ARE going to take this milk, aren’t you?” in his.

Quill says: This charming tale would be a nice addition to put right next to the shelf with your collection of nursery rhyme books and fairy tales!