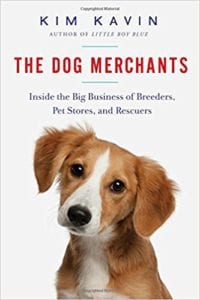 Author Kim Kavin struck gold with her 2012 book, Little Boy Blue, that investigated the backstory of dog shelters. Now she’s done it again with The Dog Merchants, a book that takes a hard look at the big business of selling dogs.

Kavin looks at every aspect of the dog market in her new book, from large scale ‘puppy mills’ to the AKC, from small breeders to auction houses where commercial breeders come to get their breeding stock. The book opens with a chapter on Southwest Auction Service, the largest USDA-licensed dog auction in the United States. The owner, Bob Hughes, notes that he is happy to sell to commercial breeders, vets, rescues, whoever might want a dog. Kavin chronicles one auction that she attended, careful not to add her own personal feelings to the mix. Indeed, throughout the book, the author rarely injects her own opinions, instead presenting the facts so that the reader can make the final decision. At the auction, she talks to different people, including one who attends to rescue dogs and another who feels that by rescuing at the auction, you are simply encouraging more dogs to be bred and sold at auctions.

An interesting chapter examines the AKC and the good, and bad, that it has caused through the years. It was interesting to read how fanciers of Border Collies reacted to the decision by the AKC to start accepting the breed into the organization’s rolls. It is not what you might expect.

The chapter that I found most intriguing what the one on ‘The Mega-Distributor.’ This section focused on Hunte Corporation, probably the largest distributor of puppies to pet stores in the United States. A few of my dearest dog friends came with paperwork that showed they’d travelled through the doors of this organization and I was quite interested in learning more. Kavin was granted unprecedented access to Hunte Corporation and again, she reports in detail, what she saw at the facility she toured. Next she looks at how the company operates, the process whereby puppies are sent to various stores and what happens to dogs that get sick along the way.

Near the end of The Dog Merchants, are a chapter on “Smart Shopping” and “Consumer Intelligence.” This is where Kavin shows us how we can make a difference – with our money. Kavin notes that “Making sure dogs are treated the way they should be treated is like trying to organize a giant puzzle of irreparably mismatched pieces...Every cent and pence that is made, every dog whose life is affected or ended, all of it comes back to regular people and how we choose to spend our money...” (pg. 233-234) What you, the reader can do is to read The Dog Merchants so you can make a more informed decision when purchasing your next dog.

Quill says: It’s quite simple - don’t buy a dog until you read this book!