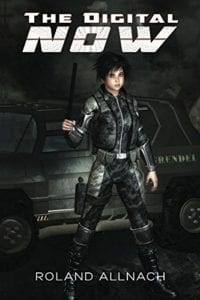 If you love dystopian “magic,” you’ll love this one. Carly Westing is our main character in this fantastical universe. Referred to as a Patrolman, she is the law and order type. And, much like the bow and arrow was to Katniss in The Hunger Games, Carly never leaves home without her trusted repeater at her side.

At the very beginning of this tale, Carly and her partner/patrolmate, Graham Chapel, find themselves in the midst of an all-out riot being held on the streets of the City of Seven Hills – a place they have both sworn to protect. Highly interesting, her home (as described by the author) has the city’s seven hills curving around one edge of the distant Downlow—the massive, sunken concrete dome that entombed the waste pile of the old city. Graham is a good man and a good partner; however, their boss, Patrolmaster Alden Bayard, is not the nicest of all men. In fact, he has a tendency to take advantage of things, including his employees. There is also Endo Stutts; whether he is friend or foe will be up to you to find out.

Carly has a slight obsession, if you will, with her home. She actually loves the City, feels like it’s a part of her, but doesn’t understand why it “belongs” to others in power. When it comes to light that a riot was simply a cover for far more sinister activity, Carly finds herself thrown into a mystery of mammoth proportions. She and Graham go on a search of the city, and when she meets up with a resident who calls himself Ian Gadwick, Carly finds out new data that will change the course of her life. Ian tells her that he actually “is/owns” the City. He is looking for his successor, and Carly is the one he seeks. So why is Carly Westing in line for the throne, so to speak? What exactly must she do to get the job? And will she be able to sort out her real friends from some very real enemies in order to get what’s coming to her?

This is an author who has given his dystopian world real legs to stand on. His characters are attractive, the pace is all action, and the City itself is a riveting place to spend some time. You will love the imagination, too. From eating the real breakfast of champions, Shaky Flakes and Moo-ju; to watching the patrolmen train with civi-sticks, this tale has it all. Much like this author’s other collections, in this book he has brought together all the best parts of fantasy, horror, technological savvy, and thrown in supernatural spice that would make the X-Filesgang envious.

Quill says: One read of an Allnach title and you’ll be a fan for life!

For more information on The Digital Now, please visit the author's website at: www.rolandallnach.com