The Day Louis Got Eaten 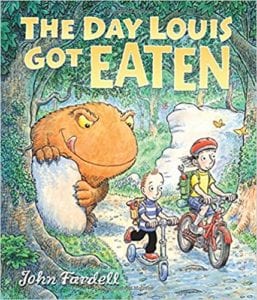 The Day Louis Got Eaten

Louis and Sarah lived in a little cottage in the woods. One day they decided to head out along a long winding path. Louis was zooming along on his scooter, but he didn’t notice that big hairy claw behind a tree. All of a sudden GULP! Louis had been “eaten up by a Gulper.” He had jumped out from behind that tree, flicked his tongue, and there was no more Louis. The big hairy Gulper ran down the path, but Sarah knew just what she had to do. She reached into the bushes and picked something up and was on her way to catch him. Down into the gully, whoosh over the trench, and over a log bridge in “hot pursuit” of that Gulper.

Sarah just about had that hairy Gulper when all of a sudden. “...the Gulper was eaten up by a Grabular.” Well, that big bad black Grabular flew across the water to it’s nest. Sarah put a float and paddles on her bicycle and off she went. She almost had that darn Grabular, who was smiling as she sat on her nest, when all of a sudden,“...it was eaten up by an Undersnatch.” That big bad blue Undersnatch dove under the water with Sarah in hot pursuit when all of a sudden ... well, you get the story. Would Sarah ever be able to rescue her brother Louis and how would she do it?

This is a saucy, silly tale of Louis and all the scary creatures who ate the Gulper who gulped him up. The story, in part, is set up in a graphic novel form with beautifully intricate panels. The not-so-scary, but hilarious critters who are eating each other up after the Gulper gulped up Louis, are charmingly appealing. Of course Sarah, who is an inventive genius, always finds that special way to fix up her bicycle so she can chase after them. The story builds to a crescendo and at the end has a special little save-the-day twist that youngsters will love. This would be a perfect circle or storytime book for little critters who love Gulpers, Grabulars, Undersnatches, Spiney-backed Guzzlerss, Saber-toothed Yumpers, and tall tales!

Quill says: This hilarious tall tale is definitely one that kids who like their stories a bit on the wild side will love!