The Daughter of the Sea and the Sky 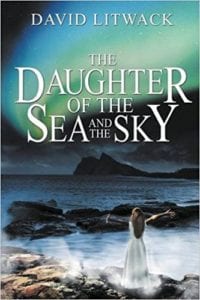 The Daughter of the Sea and the Sky

In author David Litwack's latest offering, The Daughter of the Sea and the Sky, the reader is challenged to question where the lines of reason, faith, and fantasy cross. Different people may have very different views on this and in Litwack's book; these different views are tested and in fact, cause a war. The war separates a once united area into two countries. One country, known as The Blessed Lands, believes in faith; the other country, called the Republic, throws faith aside for the lure of reason.

The story introduces Helena, a woman who grew up in the Republic. She had been taught her whole life that reason should always be the deciding factor and to forget all thoughts of faith. Her father wanted her to become a scientist who would find answers to all the problems of the world and be ten times greater than he was. She had promised him before he died that this would be her goal, but when a mysterious nine-year-old girl with golden hair and ocean blue eyes comes into her life everything Helena thought she knew is now being questioned.

When Jason went on his run across the beach he expected to see Helena and was hoping to rekindle the connection they once had, but nothing could have prepared him for what was about to happen. He found himself rescuing a young girl named Kailani from the ocean after the boat she was sailing crashed into the rocks. Suddenly his and Helena’s life is turned upside down as they try to find out exactly where this girl is from and why she insists on calling herself the daughter of the sea and sky. Both Jason and Helena know that trusting in blind faith as this girl believes can bring down harsh punishments in their country but feeling a sense of protection over Kailani they take it upon themselves to make sure she is safe.

Helena and Jason decide that the best solution is to take Kailani to a remote farm in the north where she can be away from the public eye and slowly adapt to life in the Republic. However, on this farm there are people who believe Kailani was sent there for some higher divine purpose and will stop at nothing to prove that this is true. It does not take long before Kailani’s presence at the farm grabs the attention of extremely high-ranking officials from both countries and has everyone wondering if this young innocent looking girl knows much more than she claims to.

The very beginning of this book hooked me quickly as the mystery of this unknown girl being saved from the ocean presented an intriguing mystery. However, this book became much more than a mystery as each person who meets Kailani starts to go on this journey of self-healing and discovery. It was unique to see a story that puts such a young character in a very important role. Each event that takes place relates to the decisions that lead to the next event and David Litwack does a great job of connecting these little details. However, when I made it to the end the conclusion to this mystery was not as intriguing as I thought it would be. Even though the ending was good in the sense that all of the characters are content, I was slightly disappointed as I was expecting something a little more exciting as the story builds all the way up until the last few chapters, but the ending fell somewhat short of my expectations. Regardless, overall it was a very fun and satisfying read.

For more information on The Daughter of the Sea and the Sky, please visit the author's website at: www.davidlitwack.com