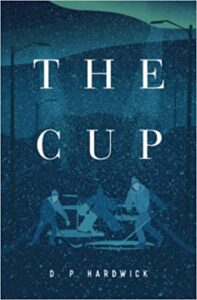 It was a bitterly cold New Year's Eve in early 1970s' Manitoba, Canada, and while the adults were inside their homes entertaining party guests, the kids were busy outside on the streets having the time of their lives playing a final championship hockey game. And so begins The Cup, a great adventure that is a hilarious, and often deeply touching, story down the memory lane of author D.P. Hardwick's childhood.

Through alternating chapters, readers not only learn about the author and his family, they also get a glimpse into the lives of his friends and fellow hockey teammates. Throughout the book, filled with vividly described scenes of the frigid Manitoba winters, there are many excellent stories that will both entertain, and make readers feel a bit nostalgic over their own childhood. For example, the great showdown between the hockey players and the evil, massively menacing snowplow that threatens to completely destroy the hockey playing area on the street, as well as the silly game of “Mrs. Heimer’s underwear!” that partially originated from the family babysitter, who was a crazy, fast-driving, yet legally blind, elderly woman. Readers will also easily find themselves falling in love with all of the characters, and will root for their favorites (who could resist not loving “Sasquatch” singing the “99 Bottles of Beer on the Wall” song ad nauseam?) as they quickly devour all the author’s tales, and sometimes even a few life lessons, sprinkled throughout the story.

What makes The Cup unique, and thus more enjoyable than the myriad of novels that inundate bookshelves everywhere, is the author’s well-thought-out inclusion of an extensive online playlist of songs (mostly from the 70’s) that readers have the option to listen to during suggested times throughout the book. Personally, this reviewer felt the simple inclusion of music really set the perfect mood while reading, that made the story a lot more dynamic, realistic and just plain fun to read. However, it did sometimes unfortunately disrupt the flow of reading (the inclusion of long website links dotted throughout the story was a bit off-putting too) because I had to stop and listen to the specific song, when I would have preferred to not be interrupted and have it play in the background while I merrily continued reading. There were also some minor issues with formatting and editing that may confuse readers, but it was not enough to completely disturb the overall enjoyment of this wonderfully entertaining book.

Quill says: For a fun-filled jaunt through the memories of D.P. Hardwick’s childhood, The Cup is sure to entertain readers of all ages.

To hear the songs that appear in the book, please visit the Apple Playlist: music.apple.com/