The Call of Magic (The Fool’s Journey Book 1) 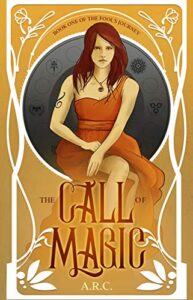 The Call of Magic (The Fool's Journey Book 1)

Describing this as a “good book” would be a monumental understatement. It would be like describing the 1953 Chevy Corvette as being an “okay car.” Reading this can only be categorized as a memorable event!

Emma Lie is our star, who we meet inside the local high school where a bully named Jimmy Haynes is harming an overweight, meek, young man named Michael Morton. Jimmy has just received a black eye in front of his football playing posse for his troubles. But the black eye didn’t come from his victim; he was just pummeled by the 115-pound Emma Lie. Now, Emma has already graduated from these hallowed halls and is on her way to the super-intelligent Harvard University. However, because of her actions, she could lose her entire scholarship and be arrested now that she’s 18. Jimmy is also in dire trouble. After all...can he hit a girl? If he doesn’t, this “leader of the pack” will fall from grace in front of his own gang. Thankfully, before he can slap Emma, Coach Ranshaw jumps in and sends them to the office.

Emma sits in front of Principal Jeminick (a former Marine) and tells him that what she did was right. He, either not wanting to get involved or actually really liking Emma for being tough, lets her leave and offers her some good advice: “Find yourself friends in life worthy of your loyalty.” It’s good advice, but words she tends to ignore. You see, Emma had a lot of friends at one point in time, yet closed herself off a while back and threw herself into a more serious role. Placing her nose-in-a-book, she has big dreams that include one day sitting in the Oval Office and running America.

Michael drops her off at home. Here Emma lives with a mother she loves who’s an amazing artist, and holds anger for a father who left them long ago. Almost running into a tall man with Asian features that seems to have come out of nowhere, Emma feels a bit uneasy as she avoids him and runs into the house to begin packing up her room in order to get ready for going to Harvard in a week.

She also must head to work at the local boutique coffee shop, Bella Lita, where she is once again surprised when the Asian man appears out of nowhere. But it’s a different stranger who captures her focus. Although trying to stay away from this stunning stranger, Emma ends up sitting down with him and discovers his name is Thies, he is also 18, a German on vacation, whose own over-the-top goal in life is to “save the world.” Thies also has something in common with Emma: they both have an odd rash on their arm, a spot that burns at times and turns red.

Time moves forward quickly and Emma meets up again with Thies and his “colleague” – a Brazilian man named Murilo who visited Emma’s house and met her mother. They tell her of an offer. They have come to recruit Emma to be a new addition at their school, a place called Institut Le Blanc. If she accepts their offer, Emma will receive a salary (which she tells them to triple in order to see if they’re lying), as well as a full scholarship. Here, however, she will not be on the road to a political future anymore; she will, instead, be taught...magic. Seems the rash she and Thies have are the mark given to carriers of magic. Emma was chosen for this, but she must sign a document and come with them before the clock ticks down and the offer is rescinded.

Before she can do anything, however, a gunshot rings out and Emma wakes up injured in a room filled with strangers. Her mother has been abducted, Murilo is in critical condition, Thies remains by her side, and a woman in white known as the High Priestess is about to alter her future. This place is called The Citadel, where she’ll not only meet new friends, but dive into a world Emma never thought was possible. Lies are told, battles are won, Emma’s heart will be broken, and a choice between staying alone or being part of a team that truly fights for one another must be made.

There’s so much to say...so many characters to introduce...and so many storylines to share, that it’s impossible to do so in a review. Just know, you’ll end up being a fast fan of this mysterious author with a great deal to share.

NOTE: When it comes to publishing dates, the author states: “This is a series told in two parts. Every month, a new book will be released. Every week, stories will be released on the company’s website (https://www.quickandanimus.com/ARC). They complement each other; knowledge from one will shed light on the other...and free, daily, important inclusions to this universe are available, as told by Fate.” Which can be read on the website at all times.

For more information on The Call of Magic (The Fool's Journey Book 1) please visit the publisher's website at: www.quickandanimus.com/ARC