Fang Me (A Demon Underground Novel) 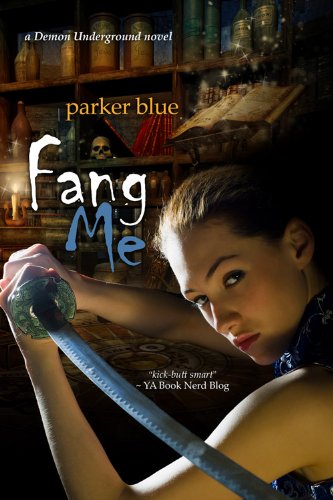 Fang Me (A Demon Underground Novel)

In Book III of the Demon Underground series, readers will once again be swept away into the world of vampires (good and bad, of course). They will once again follow the Slayer who is half human (with a little bit of succubus added in for good measure), who is doing her job and trying to ferret out evil.

Valentine Shapiro is the Slayer. A long time ago she realized that there was yet another person inside of her that she has dubbed, Lola. Lola has an immense sexual appetite and has the ability to “suck” others dry; hence, why Val takes out most of her aggressions on the streets slaying vampires in order to keep Lola in check. Of course, Val isn’t alone. Her partner in everything she does is a dog named Fang, who ‘speaks’ to Val as they work together to solve various crimes. (Fang is adorable - a hellhound mixed with a scruffy terrier that can actually sound as intelligent as Freud.)

Anyway, Val’s partner who she worked with in the City Special Crimes Unit is no longer her partner. His name is Dan Sullivan, and although he once liked Val, watching her rip the head off his ex-fiancée just because she was an evil vampire, definitely put a “chink” in their working - and all other - relationships.

This time around Val has taken a leave of absence from the Special Crimes Unit, because she must work WITH the vampires in order to find an ancient book called the Encyclopedia of Magicka which has been proven to make even the best vampire go bad. Val has to get her hands on this book before even more bad things start to happen. Joining the team of the “New Blood Movement,” which is run by the head “good” vampire named Alejandro, Val has to find a way to figure out who is telling the truth, and whether or not the appearance of a new player by the name of Trevor is a sign of help or destruction. Add in a hot demon boyfriend named Shade, and a voice that screams out, “Help Me,” and readers will find themselves drawn into a story that is both exciting and hilarious.

Parker Blue has offered two Demon Underground books before this one titled Bite Me and Try Me, and she hasn’t lost her edge one single bit. The characters are still entertaining and the plot moves along quickly, offering the reader a really fun thrill ride.

Quill Says: If you didn’t begin with the first book in this series, go back and start. Valentine Shapiro, her dog named Fang, and HER world of vampires is absolutely captivating.