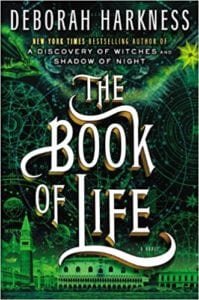 There are finales and then there are ‘grand’ finales! With this perfect culmination of magic, mystery and adventure, Harkness has provided not only one of the best series written, but she has also most definitely delivered one of the grandest goodbyes that readers will be remembering long after the cover is closed.

For those who are unaware (and that should be hardly anyone out there by now), this is the series that brought readers into a world where a discovery was made: Ashmole 782, which was an extremely strange book encoded with a secret that turned the life of an historian and very unwilling witch, Diana Bishop, and Matthew Clairmont’s life as well (Matthew is a vampire scientist and geneticist) into an unforgettable action/adventure fest. It was because of this alchemical manuscript – referred to as ‘The Book of Life’ – that made everything from vamps to witches to the darkest creatures of the supernatural world appear throughout time, preying on the duo no matter what they found or where they traveled.

Book One introduced Diana to the world; a woman who wanted nothing more than to stay in the bookstacks doing research and not deal with the fact that her family’s legacy involved the females of the Bishop clan being witches. Diana is drawn into a journey she’d rather not take, and other magical creatures that want to know what she has learned about both the past and the future appear. It is vampire Matthew who attempts to become her partner in order to get those answers. Unfortunately, their passion for each other crashes against their rival backgrounds and causes them to walk a tightrope with one another to keep the peace between supernatural and human worlds. Book Two brought about even more harrowing action, and saw the scholar and the Darwinian scientist with a penchant for blood, time traveling in order to find Diana’s powers, bringing to light The School of Night and the heavy weight that Matthew carries on his shoulders.

This time around, the action builds to a dizzying height when Diana and Matthew head back to present day and run into some old predators that are not done with them quite yet. It has never been more crucial for the missing Ashmole 782 to be unearthed. This is the time. This is the journey that will finally unveil what the future holds, and everyone (well, almost everyone), in the cast will return to make sure that no stone is left unturned.

Ancestral locales are back, teams are built, passion is raised ten-fold, and the cast of characters tie things up in an exciting conclusion!

Quill says: This is one series that will be truly missed! (Are you sure there can’t be a Book 4?)