The Book of John 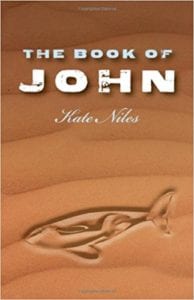 The Book of John

Neah Bay was home of the Makah, the whale hunters, but a seeker of another sort had arrived, searching for something he couldn’t quite place his finger on. John Gregory Wayne Thompson was a man who learned early on that he didn’t quite fit in, but perhaps he had found a home and a friend as lost as he was himself. George Ward had his own demons, but had a natural affinity for this strange white man, a “dirt archaeologist” from New Mexico. Their Cannary Row like friendship sustained them, their unspoken guilt buried...for a while. There were secrets and lies to be told, but John ran from his and George simply wasn’t saying.

Sister Theresa uncovered John’s disgrace in the fourth grade and “slapped them [his parents] with that straight-lipped looked only a nun can muster.” John was stupid. He clung to his ruler to read, but his dyslexia conquered him. His sister Lindsay covered for him and pulled him through school. Later it was Patricia, “Sweeney,” his wife who did it. He felt like an imposter because no one knew, even when he got his masters. Faker, faker, faker. The only thing real was the love he had for Meghan, but he denied it and left her behind, only to have her surface in his thoughts to haunt him more frequently than he wanted. He remembered how she twisted the knife saying, “I just love it when people choose their fears over love.” Had he really done that? Would he always do it?

Perhaps he’d chosen archaeology because “rocks don’t require weaving a story about human relationships,” but suddenly they did. The Pueblo were considered to be a peaceful, unified group, but something in the dig hinted of cannibalism. Warren, his dig partner, and John were startled when the evidence began to surface. Others began to step forward, expecting more from him. This was “big” and there would be speeches that would have to be made. An article in the “American Antiquity” would bring fame, but there was that ruler, the lies. Faker, faker, faker. He was simply an imposter and he began to run. Would he be able to find himself in Neah Bay with the Makah? Could he find solace in his new friend George? How had he turned into such an imposter?

This stunning portrait of a lost man trying to find himself will mesmerize the reader. At first the book was a little too lyrical for my taste, but once it “settled down” so to speak, my interest piqued very quickly. I found a story, one all too commonly seen, of someone who has masked the pain of disability and wants to escape himself, but cannot figure out how to do it. Another parallel theme of prejudice is the aorta of the book. One particularly striking line, relative to both, simply said “Socially sanctioned persecution of people,” a poignant line that will make the reader pause and think about what this book is really saying. This is a read that will unwittingly pull you through its pages, one that won’t let you put it down.

Quill says: It is a book of romance, hope, fear, and ultimately one that questions where evil enters into our lives, but only if we let it.