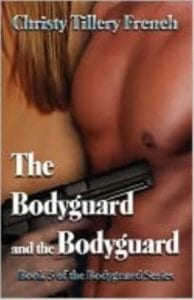 The Bodyguard Series has been in the romance/adventure category for a good long while, and the reason for this is, quite simply, because it’s good!

In this newest release, readers follow their favorite bodyguard, Natasha, as she runs far and long from a crime boss who is after her head. And she has to deal with the fact that she now has her own bodyguard - protected by the one man she can’t seem to get over - her fiancé, Striker. This is a strong woman who became a bodyguard because it’s what she loved to do, so having a man give her instructions and tell her how to hide out is not exactly her style. She and Striker broke off their engagement in one of the previous novels because he wants her to get out of the ‘biz’ and become the ‘safe’ wife and mother.

Coming off her latest protection detail, Natasha has walked away from a man named Donahue - the ultimate crime 'boss.' However, now it seems that one of Donahue's own men, Dean Lanford, has chosen to break away from the clan and is making his own name in the gritty, bittersweet world. The one thing Lanford is desperate to do is to take out the female Bodyguard who had the nerve to save Donahue's life - proving himself to be a prominent enemy.

As Striker heads them up into the middle of nowhere, to an old cabin that belongs to his family, his ‘helpers,’ Pit and Bigun, come along for the protection detail. Not to mention, Natasha’s dog, Brutus. But they can’t hide for long, as Lanford and his men are hot on their trail - taking out some and eventually wounding Striker.

When Striker has to be led back to a vet’s office in the middle of the woods in order to get treatment, Natasha strikes out on her own. What follows are scenes that rival 24, as this woman takes her stalkers out one by one, trying her best to avoid Lanford and her ultimate fate.

From Book One, Natasha has been great, and thankfully there is no end in sight, because the next title will include poor Natasha, her ‘mending’ relationship with Striker, and a Bridezilla who is about to have the most frightening need for a bodyguard - protection from her own fiancé that she is still determined to marry. Ms. French certainly has the ability to set up scenes and bring her readers with her through some thrilling escapes, as well as some chilling moments and dead-on romance. If you didn’t begin with Book One of this series, head back and get them all. These characters will become one of your favorite teams.

Quill Says: All action, all romance - the clock doesn’t stop until the last page is read.