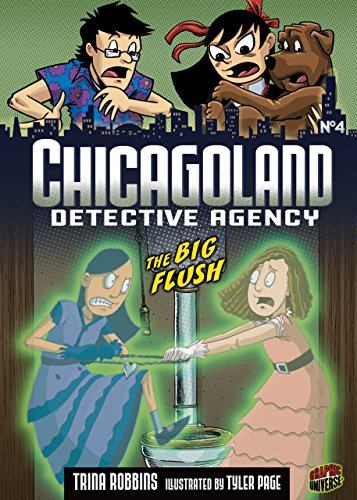 Megan Yamamura listened to her dad as he talked about Pine Lake, “A very nice girls’ boarding school 30 miles outside of Chicago.” She was in trouble ... again. Ms. Commons was throwing her out of Stepford Prep. It was three strikes and you’re out and Megan had them all. She’d refused to wear the school uniform, got in a food fight, and had been caught reading a “comic book” in class. Reform was not a word in her vocabulary, but Haiku, vegan, and manga were. She’d been kicked out of two schools already, but it was going to be a problem this time. She wouldn’t be able to help out with the Chicagoland Detective Agency if she went to Pine Lake.

Raf Hernandez and Bradley, the talking dog she’d help spring “from that mad scientist,” were her partners. Her father wasn’t going to be able to attend the school’s “get-acquainted luncheon” the following week so she was going with Raf and Bradley. The only way to get Bradley past Ms. Goldberg, the headmistress of Pine Lake, was to turn him into Raf’s service dog. Blind he would pretend to be, but soon there were things that the group would see that were some spooktacular. Megan spotted a ghost in the girls’ room wailing out a Scott Joplin ragtime tune.

“It disappears,” Megan claimed, “into the john.” Ms. Goldberg was alarmed at the discovery of the haunted plumbing and needed a detective agency to figure out the problem before the school went down the tubes. “Detective Bradley at your service, lady.” The Chicagoland Detective Agency would take on the case. They soon discovered that the ghost who was “haunting the plumbing” was named Charity Merriweather. The group soon found themselves in deep trouble when Raf found himself possessed by a haunted faucet. “Whuff!” Would Bradley and Meagan be able to solve the mystery of the haunted plumbing and rescue Raf?

The Chicagoland Detective Agency steps up to the plate to solve the case of Pine Lake’s haunted plumbing. This graphic novel is rendered in typical black-and-white manga style, the “comic book” style that Megan loves. Of course she loves Haikus and working with the Chicagoland Detective Agency to solve mysteries. As the fourth in the series, it doesn’t disappoint and the plot line only seems to get better. This time the trio are transported into the past as they try to solve their latest case. The little twist at the end lends excitement to the story, something that the reluctant reader will definitely enjoy. The agency claims there is “no case too weird” for them to tackle and this one proves it. If you have a youngster who would enjoy a slightly wild and wacky series, this is one you should take a look at!

Quill says: If you have a youngster who likes their graphic novels a bit on the spooky side, The Big Flush will take them into the past with a splash!