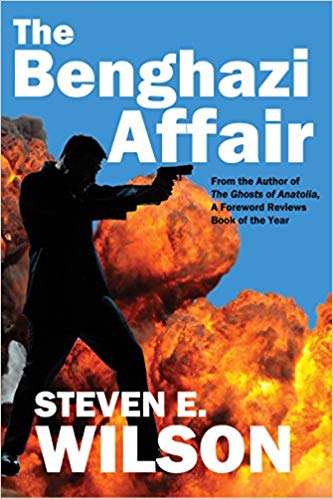 In this third installment of the Stone Waverly Trilogy, readers meet up with the character they have come to respect in his classroom, leaning on that big metal teacher’s desk and trying to bring clarity to a discussion with his students about 9/11. These are young boys looking up to him at St. Christopher’s, and Stone is bringing all he can (instruction-wise and faith-wise) to a discussion commending the heroes and heroines who fought and continue to do so for a country that is “gifted” with the freedom to have these conversations in the first place. When he looks up as the class is ending, a woman he knows all too well is standing at his door. Her name is Marilyn Harrison and Stone already knows that this is not just a social call.

Stone was one of the best specialized skill officers this country has ever known. After the death of his beloved wife, he walked away from those fearful missions and turned his attention on teaching, raising his children (Anne and Mike), and hiring on a nanny who helps him keep things afloat. Stone struggles with not wanting to ever fight again versus his need to make sure that everything remains good for America so that his own children do not have to deal with war, death and destruction.

Harrison delivers her deal. If Stone takes on the mission, it will be the last time they ever ask him to do so. Stone is adamant about staying with his children and not upsetting their lives. After all, he’s already kept under wraps the past life that he’s had, choosing not to tell his kids about the harrowing situations he’s been in and the friends he’s lost in the process. But when Marilyn walks out, the night ahead is truly difficult. Stone knows in his heart that he will journey down this path once again if it means that he can grant more security to Anne and Mike.

It is time to find out the details, and Stone has no idea the amount of weight that will be put on his shoulders. Heading to CIA Headquarters the next day, he and Deputy Director Harrison talk about the inner-workings of what he is to do; the crew he is to work with; and the possibility that his most “special skills” might be called upon to eliminate some truly bad guys. He must head to an area where some of the most evil beings reign; splinter groups that are planning the demise of many, including those in the U.S.

His primary mission is to locate a Russian weapon that has disappeared. Thoughts are that it has fallen into the hands of a man who was in deep at one time with al-Qaeda until having a falling-out with the leadership and becoming a Libyan rebel leader. But…that is just one of many things he will have to face. Meeting his covert team, Stone flies into a world of pain, panic, distress and evil acts done on a daily basis in Gaddafi’s realm. Not only will Stone find love, but he must also find a way to get free and stay alive when he finds himself under attack and abducted by villains.

A true patriot, a loving dad, and a character readers are going to truly miss, Stone Waverly has been given an epic ending to his trilogy by his incredible creator, Steven E. Wilson. This is a series you most assuredly do not want to miss.

Quill says: They say: “All good things must come to an end.” However, this author does have the ability to one day bring Stone back to the world…and here’s hoping he will do so.