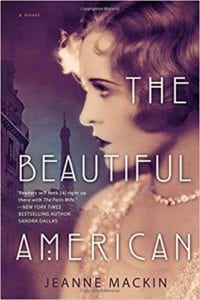 In her latest book, The Beautiful American, Jeanne Mackin pays admirable homage to American photographer and beautiful woman, Lee Miller. Ms. Mackin focuses on Miller’s notoriety whose iconic status was established as a fashion model in New York in the 1920’s before going to Paris where her fame continued to grow as a noted fashion and fine art photographer.

Lee Miller was born in Poughkeepsie, New York in 1907 to a family of privilege. Unlike most girls her age, Lee wasn’t interested in teddy bear teas and playing dolls. Rather, when she met Nora Tours, daughter of the family’s gardener (and weeks apart in age), she finally met someone who understood adventure (nearly) as well as she did. Lee’s father, Theodore, was an amateur photographer and often used Lee as his model subject for his work. Perhaps he was the inspiration for Lee’s ultimate love (and ability) of photography. No matter, at the age of eight, Lee’s attention was focused on Nora’s arrival with her father and the adventures of climbing trees and being tomboys. The course of life is fragile and innocence is lost. Such was the case for “Li Li,” Nora’s nickname for Lee, after a visit to a family friend in Brooklyn. It wasn’t until years later and a continent away that Nora learns why that sweet little eight year old girl in the flowing white dress couldn’t come out to play anymore.

Years later and more than a collection of history in their respective pasts, Lee and Nora meet again. It is post war England and as was the case with many, Nora’s purpose in being there was to continue her quest to pick up the pieces of her life post WWII. Her reason for being in England was her continued search for her missing daughter, Dahlia. Not necessarily as fate would have it, she literally bumps into Lee outside of Harrods. The last she had seen Lee was years earlier; a brilliant time for expatriated Americans “finding themselves” in Paris. It was a time before war and devastation, but there was one memory that resonated for Nora when she sees Lee again ... The love of her life, struggling artist Jamie, was one of Lee’s love conquests. The first memory that comes rushing back for Nora in that Harrods doorway is the image of Lee and Jamie in Lee’s Paris studio bed. Perhaps their chance meeting a (sort-of) continent away was more than just a coincidence.

Jeanne Mackin has done a brilliant job in committing the life and times of Elizabeth “Lee” Miller to the pages of The Beautiful American. Mackin’s ability to take a real person (Lee Miller) and fuse her life together with the fictitious “Nora Tours” and create a friendship that transcends the infamy of pre and post WWII is fascinating and an accomplished feat that has been delivered ten-fold. “Nora” is as credible a character as the real person Miller is. Mackin has a style that requires little coaxing to encourage the reader to turn to the next page. She is the epitome of a story teller in that her opening to The Beautiful American immediately hooks her readership and convinces them that they have just come across a must read. She consistently sets up each scene with solid foundation that easily coaxes the reader into the situation with a natural curiosity to find out what will happen next. After reading The Beautiful American, I went back to the internet to learn more about the infamous Lee Miller and found that everything I read, Ms. Mackin had accurately captured and adeptly spun the information into storytelling fashion personified in her book. This is a fantastically written book and truly a story that I would challenge anyone who reads it to say it was easy to put this book down before the last page had been read. Well done Ms. Mackin! I am a fan!

Quill says: An exceptional story about a woman of substance who left an indelible mark as her legacy.