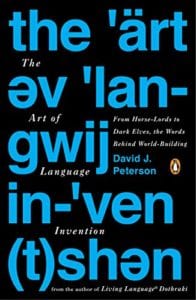 We lose count each day of how many times we speak, write down, and even think about our words but the language we use had to be developed. Why do we say things in a certain way or in a certain tone? What exactly is a word and what gives it meaning? These are all questions language developer David J. Peterson asks himself as he creates the languages for some of TV’s most popular shows and movies that include Thor: The Dark World and his most recent and ongoing project the language of Dothraki in the HBO series Game of Thrones. With pressure coming from the producers of the show and the expectation of the fans, Peterson is constantly developing his language creations to make them genuine and true to the characters.

In The Art of Language Invention, Peterson goes through the steps to inventing a language and bringing it to life. As he does, he shows that there is so much more to a language than simply just the words. Peterson explains that the tone, interpretation, the harshness or softness in which a word is spoken can be just as important as the word itself when developing a language. Slowly over time, the pronunciation changes or even particular words take on a different meaning as the current generation finds a new way to use it. For example, the word “sick” in today’s society can mean something that is cool or fun, when in the past it only defined when someone did not physically feel well. This ongoing subtle change in every language over time is what makes developing a new language so challenging because the task of the language creator is to make each word sound as if it’s been used for years.

There were many aspects of language that Peterson brought to life in this book that I would have never thought of before and there were parts in this book that were interesting to read. However, I was disappointed that there were not more examples of how the languages were developed in some of the famous works over the years. When I picked up this book I initially thought that it would take me through the languages of books such as J.R.R. Tolkien’s Lord of the Rings or the many alien languages heard in the Star Wars series, because of course I am a complete book nerd and anything I can learn about my favorite sci-fi/fantasy stories is wonderful. Even though Peterson does give the reader a small glimpse into some of these famous languages I found that this book was much more about the nuts and bolts of developing a language. There were some interesting parts but for me I found myself becoming bored with the writing, just for the simple fact it was not what I expected. For anyone who is serious about coming up with their own language it would be extremely valuable but as a fun read this book fell short for me.

Quill says: An informative book for language enthusiasts but nothing too exciting for those simply interested in learning more about the many languages developed for their favorite sci-fi/fantasy books/movies.