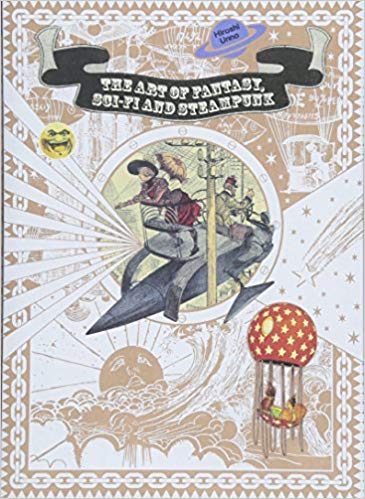 The Art of Fantasy, Sci-Fi and Steampunk is a gorgeous visual history of art from the Romantic era to today. Author Hiroshi Unno explores a host of different artists, including John Martin and Albert Robida, while providing insight into their styles and influences.

This book opens with an introduction of the Gothic and Steampunk styles. There, Unno provides a brief overview of how they initially developed and early Romanticism in England, France, and Germany.

After the introduction, The Art of Fantasy, Sci-Fi and Steampunk breaks down into four sections: “Gothic Romanticism in Art History From Gothic Revival to Romanticism,” “The Victorian Wonderland and the Origins of Sci-Fi and Steampunk,” “The London Underworld,” and lastly, “The World of Fantasy Illustration Adventures in Wonderland.” Each chapter is razor focused on one aspect of the genre and provides page after page of beautiful paintings and illustrations as examples.

The first chapter describes Romanticism in detail. Unno references C. M. Browa’s The Romantic Imagination, in which Browa “asserts that imagination is Romanticism’s distinctive feature.” (Unno 28). Unno himself goes on to explain that “imagination was how the self discovered itself.” (28)

The details provided about each artist help readers connect with each piece of artwork. In this chapter I particularly liked the pages devoted to John Martin, known for painting great disasters like Pandemonium and The Great Day of His Wrath.

Following next is “The Victorian Wonderland and the Origins of Sci-Fi and Steampunk,” where readers explore the end of the Victorian era in 1901 and dive into the Victorian Revival that began in the 1950’s. “Steampunk in America at the end of the twentieth century was intimately connected to the Victorian revival.” (95) Unno’s snippets of history are engaging, and make readers want to learn more about these fascinating time periods on their own.

“The London Underworld” is by far my favorite chapter. It opens with a brief history lesson of nineteenth century technology. It was during this century that gas and electric street lamps became commonplace. “The boundary between day and night blurred.” (212) This gave way to a kind of nightlife London had never seen. “The night was dangerous, filled with the risk of calling up horrific monsters that had long lurked in the dark.” (212)

Unno goes on to describe this as the age of “murder as entertainment,” (213) the time when detective and crime novels grew to extreme popularity. His dreary and fascinating descriptions of Victorian London’s underbelly are matched with equally grim illustrations, from James McNeil Whistler’s The Falling Rocket to book covers of Sir Arthur Conan Doyle’s Sherlock Holmes novels.

“The World of Fantasy Illustrations Adventures in Wonderland” brings this book to a close. Here, Unno discusses the overlap of adulthood and childhood in fantastical books like Alice in Wonderland and Peter Pan. “Steampunk is rooted in nostalgia for childhood’s playing with clockwork toys.” (249) It’s an interesting concept, and one I’d like to further investigate.

The Art of Fantasy, Sci-Fi, and Steampunk is a beautiful book that I highly recommend. Even if one is not interested in the history and analyses throughout it, merely flipping through the pages to appreciate the artwork is an enriching experience.

Quill says: This book is a must read for every fantasy lover!