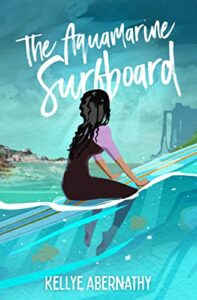 When young teen Condoleeza, known as Condi, sees a handsome surfer braving the sea near her home in Windy Hollow, she is enchanted. And she will become more so when the two begin to converse. Little does she know that Trustin, her newfound friend, is far more than just a surfer and their meeting, far more than just good luck.

Soon after their first encounter, Trustin will lead Condi into a parallel universe where she will see spirits whose role in the lives of humankind is pervasive, yet ever hidden. She learns that all of us have Shadow Voices that speak our evil traits. Trustin has special dislike for the Shadow Voice of the evil Bernardo, whose power, even after death, is a danger to all and must be silenced. But this will only happen if Trustin is able to solve a riddle set for him by Koan, the spirit of the all-encompassing ocean. Koan will also assign a task to Condi: she must reverse the tendency of those in the Dry World, especially in Windy Hollow, to take and not give back. She will be one of Koan’s Connectors. But how can such a young person affect the activities and fate of a whole town, a wide region? Koan assures her that, in such matters, age is no barrier.

When she returns to the known world, Condi will have the support and wisdom of yoga teacher grandmother, Grand Ella, who took her in after the tragic death of her parents. Condi’s work will begin with the salvation of the Beachlings, a small gang of old women and one significant dog, who live out on the craggy shores of Dipitous Beach. The townspeople consider them homeless, dirty, and dangerous; but through Grand Ella’s eyes and wisdom, Condi knows they are gifted, learned and harmless, despite their strange ways. Condi will sustain her deep relationship with Trustin, helping him to solve Koan’s riddle while she strives to fulfill her assignment from the sea deity: to reverse her community’s recent moral downturn.

Author Abernathy brings to this new medium much experience relevant to its plot. She is a yoga teacher like Grand Ella and works with trauma survivors comparable to the fascinating band of Beachlings whose portraits add much to this rich, poetry-infused tale. Abernathy intends this book for young adult readers, though their parents may well join them in the appreciation of its many mystical elements. Condi is presented as emotionally repressed, unwilling to share her intense grief with others, as well as rather shy, somewhat embarrassed by having to wear glasses, which prevents her from becoming a surfer. Condi’s conquest of these personal obstacles can give encouragement to young people facing similar challenges, opening the chance to view themselves as, like Condi, potential social activists able to make a real difference in the lives of those less fortunate.

Quill says: A practical young girl becomes a puzzled entrant into the world of magic, leading to a chance to improve herself and assist in upgrading her decaying environment in this daring, dreamy debut novel by new writer Kellye Abernathy.

For more information on The Aquamarine Surfboard, please visit the author's website at: kellyeabernathy.com/