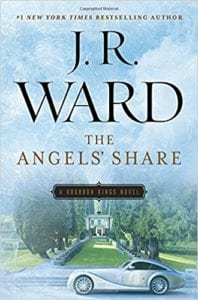 J.R. Ward serves it up neat once again in her second installment of The Bourbon Kings series, The Angels’ Share, the continuation of her epic series devoted to the Charlemont, Kentucky Bradford family ‘bourbon kings.’

William W. Baldwine, the ‘bourbon king,’ has passed. His demise wasn’t exactly what his family would have anticipated. How is it possible a man of such strength, power and notoriety would end it all one day by way of suicide? His body had been found at the base of the Falls of the Ohio River; wedged and tangled in one of the boat slips next to a weather-beaten old fishing trawler. Indeed, this was not how his life was supposed to end. Jonathan Tulane Baldwine (Lane) had to see for himself. He drove out to the Big Five Bridge and climbed upon the rail. He wondered what final thoughts went through his father’s mind moments before he took the plunge. He railed insults into the air around him and blamed his father for the death of the faithful business accountant, Rosalinda. He would never forgive him for the act of trying to murder his own son, Edward. The kidnapping and subsequent torture Edward endured in the jungles (and at the hands of his captors) was all due to the orchestration of the mighty William F. Baldwine.

Perhaps it was Lane’s father who got out just in time. In the wake of his death, his family was in financial ruin. The millions were gone—promises and the constant borrowing from Peter to pay Paul had caught up. It was never Lane’s plan to fix anything his father had ruined. He had plans for his future and it didn’t include cleaning up someone else’s mess. His future was looking great with Lizzie, his one and only true love. He could care less about the train wreck his spoiled sister had made out of her life. Let her figure it out even if it required marrying the creep she was about to marry. What Lane didn’t know, however, was back at the estate, a matter is uncovered that changes the notion of Baldwine Sr. committing suicide and has the authorities considering murder in its place.

J.R. Ward succeeds ten-fold in delivering a juicy and scandalous sequel to The Bourbon Kings in her latest installment: The Angels’ Share. I was immediately drawn to the title and even more-so when I read the note from the author. Ward explains the correlation between the title and the fact it is a ‘term of art used in the bourbon-making industry.’ I will not give away any more information as this is merely a tip to the iceberg of a truly well-written and engaging novel. Ward also provides a character guide in the forefront of the book that outlines their respective roles within the story. I had the pleasure of reading the first in this series and found this helpful as a refresher to jump into the continuation of the story. Ward dives into the continuation of the Baldwine family legacy full throttle and the pace does not let up throughout. The scenes are well-planned and are a fantastic platform to launch the reader into the next round of dialogue. The characters are colorful at best and Ward has a natural knack of planting seeds that grow emotion from her audience. Great job! I look forward to where the bourbon kings go next.

Quill says: Yet another epic journey further into the lives of Charlemont, Kentucky’s famed ‘bourbon kings’!