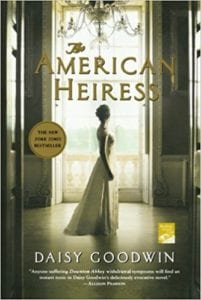 The date is August, 1893, and Cora Cash is about to embark on her voyage of adulthood, beginning with her coming-out party at her parent’s stunning home in Newport, RI. This is the type of soiree that the East Coast “money” families were always famous for throwing; and this particular ball has been advertised as being the most lavish party that the wealthy Rhode Island coast will see all summer.

Cora has been named the richest girl of her generation and most definitely has everything handed to her on a silver platter. She has everything except what her mother wants Cora to have, and that is the one thing that money can’t buy in the United States of America. So, after her party is over, Mom decides to take Cora to England in order to secure a husband for her; a husband with an elusive British title who lives in an ancestral home, and has a lineage of pure highfalutin English blood. Of course, what Mom doesn’t realize is a “title“ doesn’t mean all that much, unless its King, and an ancestral home is nothing more than a pile of old stones that’s falling down, and the man is simply looking for the money to fix it up. (And that man doesn’t care in the least if the purse is held by an American ‘princess.’)

Cora soon meets her Duke, Ivo - the Duke of Wareham - and they fall in love and marry. Although romance is a tough subject among the British (Mr. Darcy proved that a while back), as they are perceived and written about as cold and more than a little “uptight,” Cora Cash is an immaculate woman with a tough spine that begins to wear British society down. The newlyweds seem to love each other but have to face a great deal of problems including infidelity, no bathrooms in the castle (which would certainly be a big problem), and meddling mothers-in-law, as they go about their lives together.

The nature of the plot is what makes The American Heiress different from a typical historical romance. Cora has a hard time realizing how important reputations are in Royal England, and how the standards are so much “higher” than in New York and Newport society. Ivo has his own demons - for instance, a few affairs that happened before he even met Cora come back to haunt him, and the fact that his castle is falling down and needs repairing is a subject that induces many arguments. Cora tries to please her man, but she has always been a truly independent girl and finds it hard to kowtow to the English rich when she knows that they aren’t anywhere near as rich as she is - even though they DO own the covetous ‘titles.’

This author is a wonderful storyteller, and has certainly done her research into the lives of the rich and famous. For example: the summer cottage of the Cash family in Newport was fashioned to be a mirror-image of the Palace of Versailles in France…except bigger. Their ‘Hall of Mirrors’ was much larger than that of Louis and Marie Antoinette’s, and the Cash family was blessed with far more servants. Add to that the British estates, which are so well-told that the reader actually feels as if they are experiencing the drafts for themselves; and, the slap happy people who attend all the glorious parties, and soon every page of this book becomes truly fantastical and completely unforgettable. This author has created an outstanding work that is enormously true to the era, that readers will really enjoy. The American Heiress is a definite keeper and, hopefully, just the first novel in a long line still to come.

Quill Says: There have been many books written about the idle rich, but this author has hit the nail on the head. A truly fascinating story of the decadence and mystery that was the Gilded Age.