The Adventures of Snip in Oregon 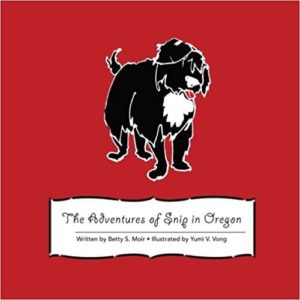 The Adventures of Snip in Oregon

Snip didn’t have a place at the table, but I’m sure if he were offered one he wouldn’t hesitate to accept the honor. He was a proud member of the Moir family and if he could really speak I’m sure he’d let you know that he wasn’t just your average dog, but rather one of especially fine breeding, one made to keep a family of five on their toes. He was “half poodle malamute and half husky” and he decided to adopt a needy family in the 1970s, a decision he never regretted. The kids, Heather, John, and Jim had been living in the Philippines and when they arrived in Oregon he was waiting for them. Of course the children had Mom and Dad and they needed a bit of tending to now and then as well.

A country dog had a lot of work to do from catching pancakes or waffles on a Sunday morning to traveling to the Dairy Queen to have a cone with the kids. When he wasn’t working, he was supervising the children as they tended the farm animals. The year Snip came in fourth in the Showmanship Contest for being such an obedient dog was one of the biggest honors in his life. In this book you’ll learn about how he taught John to drive, his run in with a raccoon (hey, that’s my food !), his daring rescue of Jim from the icy water trough and how he unfortunately got a bit too close to a skunk who didn’t care for dog kisses (pee yew!). There’s more, but you’ll just have to read the book!

This real life tale is a heartfelt and heartwarming family’s story of their love for their dog. Any person who has had a family pet, especially a dog, will enjoy reading about Snip. The text is scattered with photographs and lively watercolors that capture Snip’s zest for life. This book is set up in a picture book format, but the story is geared toward the confident reader ages seven and up. This endearing story could easily be read to a younger child or read to children in a homeschool or classroom setting. A sequel is in the works and if you fall in love with Snip you’ll want to snap it up!

Quill says: This charming, nostalgic story about a family pet . . . errr member, will bring to mind your family “members” who have crossed over the rainbow bridge. This is a great story for animal lovers!