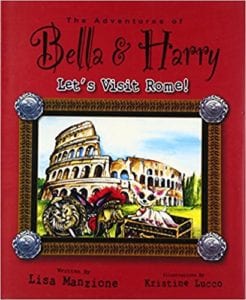 Wide-eyed Harry smiled as he put on his gladiator outfit and exclaimed, “I am a gladiator! I am a gladiator!” Not really, he was simply pretending to be a Roman gladiator. Of course Bella, his sister, thought he was being a bit silly and talking to himself. Bella knew that gladiators were long gone and hadn’t “been around for thousands of years.” They could, however, be seen in costume at the Roman Colosseum where tourists could take their pictures. The “real” gladiators competed at the Colosseum in Rome, Italy. Bella got out her pointer, pointed to Italy and began to give Harry a little Roman history lesson. It was time for Harry and Bella to head off on one of their excursions to actually see just where those gladiators competed.

The Colosseum, which was originally known as the Flavian Amphitheater, was in ruins “mostly because of earthquakes and stone robbers.” The underground hypogeum was where Harry would have entered the stadium had he been a competitive gladiator. Bella told Harry that the amphitheater, an “oval or round” building, was 2,000 years old. The Roman Colosseum was just the first stop on their busy, busy tour of Rome. They went on to visit the Palatine Hill, the Roman Forum, Circus Maximus, the Piazza Navona, the Trevi Fountain, the Trident, and the Spanish Steps.

This is a fun tour of Rome with Chihuahua siblings, Bella and Harry. One way to learn a bit about geography and foreign customs is to head on out around the world with Bella and Harry. This is one of several books in the “Adventures of Bella and Harry” series, one that reluctant readers are sure to enjoy. The tour of Rome is a casual one where the young reader can learn about some of the main tourist attractions of the city, hopefully using one of them as a stepping stone to further reading. The dialogue is casual and conversational and the book is presented in a picture book format. The artwork is bright, animated, and appealing. In the back of the book are a few Italian words and phrases. If you’re interested in a ‘round the world Chihuahua travel series, this is one you may wish to add to your list!

Quill says: Harry and Bella will give you a few lessons about the world around us in their series, the "Adventures of Bella and Harry," that young geographers are sure to be interested in!