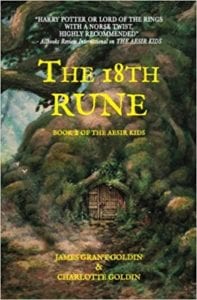 The children of the Norse gods have done well in all of their training in their home city of Asgard, but now they face an even greater challenge. They will travel to Vanaheim and attend a camp where they can work on strengthening their skills. There is one catch to this adventure, the gods of Vanaheim and the gods of Asgard have had disagreements in the past and do not get along well. Many times those disagreements have turned into destruction and war, so it is not surprising that the Aesir children are feeling a bit apprehensive about their trip.

Among the children going on this trip are Thrud, daughter of Thor, her brothers Magni and Modi, Fire, who has amazing abilities with flame, Ull, who is an expert with skis, and Forseti, an expert archer. There are also two mortals that serve Thor who are allowed to go as well, Tjalfi, who has the ability to run at amazing speeds, and his sister Roskva, who has the ability to hear even the faintest sound. Even though this is usually a camp strictly for children of gods, both Tjalfi and Roskva are thrilled with being allowed to go. However, it does not take long for trouble to start...

When the children reach camp in Vanaheim they are greeted by the head camp counselor, Skogurvegg, and his assistant Tryggvin. From the beginning, all of the Aesir children could tell that something was wrong about the way Skogurvegg treated them while getting settled into camp. The first thing he has them do is play a game with the Vanir campers and it did not take long for the game to become violent. For starters, it seemed as if the entire forest, including the grass, trees, and roots, were working against the Aesir team as they used all of their skills to try and win. However, what started out as a simple game became terrifying when Roskva got pulled into a lake by a vicious looking vine and nearly drowned before being saved in the nick of time by Thrud. Utterly surprised that the camp counselors were not more concerned with this attack against their teammate, all the Aesir children agree that everyone should be on guard while they are at the camp.

Unbeknownst to all of them, the playing of a game will be the least of their worries, as a dark evil resides under the land of Vanaheim and it is waiting for its chance to escape. With all of their strengths working together, will the Aesir children be courageous enough to defeat this evil or will it be too much for them to handle this time?

This is a book that will thrill any adventure or fantasy enthusiast, as I could not put it down after I started. Every chapter had suspense and action in it that had me turning pages as quickly as I could. The authors do a great job of developing each of the characters as well, and that creates a bond between those characters and the reader. I will definitely be looking for the next book to come out and will snatch it up when it does!

Quill says: Loved this book from the beginning, and could not ask for a better adventure story!

For more information on The 18th Rune: (The Aesir Kids, Volume 2) , please visit the book's Facebook page at: www.facebook.com/TheAesirKids