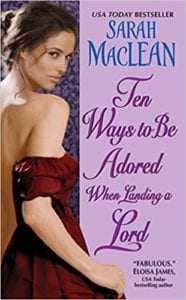 As you will find on this website, I absolutely fell in love with Ms. MacLean’s first book called, Nine Rules to Break When Romancing a Rake. Not only was the title hilarious, but this is a writer who captures you in the first paragraph; and that’s even if romance isn’t your thing. Her characters are so ingratiating you find yourself routing for the heroine from the word go!

In this, her newest offering, the reader is immediately introduced to a local newspaper “rag-mag” of the time period titled, Pearls & Pelisses; which does an article about the ten most eligible bachelors in their fair city, and how any woman – worth her weight in brains – can land one of them just for herself. The number one bachelor listed is Lord Nicholas St. John, and from the moment that the newspaper hits the stands, his life turns into a total and complete mess. Wherever the poor man goes there are lines of females batting their eyelashes and practically drooling all over themselves to get two seconds with the charming – single – prince of their dreams.

This is not easy for Nicholas, especially since he’s spent most of his entire life being the hunter and not the hunted. In fact, he has gone on many excursions into the middle of nowhere in order to track down things that others have lost…or have been stolen from them. That’s why, when he hears about a Lord’s daughter who is missing, he is so thrilled he can get out of town and away from the desperate lasses who want to tie him up and cart him to the marriage altar, that he practically runs out of town to hunt for the missing girl.

During the hunt, he finds himself at the door of Lady Isabel Townsend. Now this is one lady who has worked her proverbial behind off to keep her home and her family…not to mention her secret…from the rest of the world. Her father was a hideous man who liked to wager her in poker games and Lady Isabel has – on far more than one occasion – had to kick men out of her home who have come to “claim their prize.”

Now she finds herself in financial straights and must fix the roof of her estate in order to protect the women who live inside. In order to do this, she must sell her greatest treasure, and Lord Nicholas is the antiquarian who has come to catalogue and price her valuables. Little does he know that he is also walking into the arms of the most amazing woman he has ever met.

Quill says: At once brilliantly funny, highly adventurous, as well as an indelible story that will stick with me just as long as my beloved Mr. Darcy will. And that’s, literally, the highest compliment an Austen fan like myself can bestow. I am thrilled that Ms. MacLean has come on the scene with her fabulous books, strong women characters, and men that will make even the hardest cynics swoon.