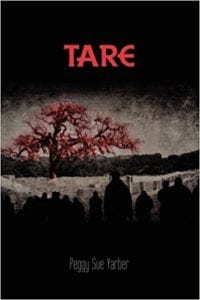 It is a quiet day at the Rocketship Café; just two regular customers keep owner Gilly busy. Minnow, one of the customers, is sitting with a tape recorder, trying to record an oral history of his childhood for his grandson’s school project. Suddenly a big, burly man enters the café, accompanied by his wife and twin daughters. This new guest, Washington, mistaking Minnow for a reporter, guides his family to Minnow’s booth, and begins to tell his amazing story. In disbelief, Minnow and Gilly listen to an account of the military taking over a local town to control a virus that is running rampant and threatening to destroy the country’s grain production. When his story is told, Washington and his family leave the café while Minnow and Gilly are left to wonder whether they just heard a true story or the ramblings of a madman.

So begins TARE, the suspenseful novel by first time author Peggy Sue Yarber. The story then jumps back in time to the military’s arrival in a small, peaceful town. The military has very little regard for the townspeople as they plan to isolate the town and run an experiment, with the townspeople playing the role of lab rats. With Washington, and his commanding officer, the Colonel, running the show, the military quickly take control, killing several young men during their conquest. The town is soon encased in a magnetic shield to contain both the virus and the inhabitants.

As the story unfolds, events spiral out of control with the military’s best laid plans falling flat. They want to first study the effects of eating the grain; then show how the virus infected food affects conception and childbirth. But the townspeople soon grow weary of their conquerors. In desperation, some willingly commit suicide by walking into the magnetic shield, while others begin to protest. Meanwhile, soldiers, against orders, begin to fraternize with the civilians. Washington, once the strongest supporter of the mission, starts to doubt both himself and the military. Soon it is unclear whether the virus will be contained and more importantly, what is happening in the fields?

Taking the title of her book from a Biblical parable in which tare, a sometimes poisonous seed, would be separated from the wheat seed and burned, the author uses the term as a present day parable for separating good from evil. We see good people, both townsfolk and military, forced into difficult situations with other cruel and unfeeling people. Who will win? The battles take many different forms throughout TARE and culminate with a confrontation between Washington and the Colonel at the end that will keep the reader glued to the page as these characters fight over this same concept.

Quill says: A fascinating look at human nature in a world run amuck.