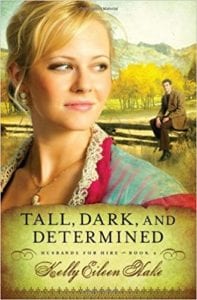 all, Dark and Determined (Husbands for Hire, Book 2)

Hope Falls is a small town in the middle of nowhere that was purchased by four female friends. Starting out as a mining town, a collapse in the mines killed many and injured Braden Lyman - the supposed owner and "boss" of the town.

His fiancée, Cora, and his sister, Lacey, along with Evie, a friend, and Naomi, Lacey’s cousin, raced to Hope Falls and basically took over. What they are trying to do is turn Hope Falls into a logging town.

In the first book in the series, a flier went out looking for loggers, as well as three god-fearing men for marriage opportunities. Unfortunately, far more than three men ended up answering the ad, and now the logging community is filled with men who are vying for the young women's attention.

In the first tale, one man became what you might call a foreman of the town. He goes by the name of Creed and came to Hope Falls looking for his brother’s killer. While doing so, he fell in love with Ms. Evie.

In Book II, a hunter, tracker, and all-out rugged man is after the truth. He lost a brother-in-law in this so-called mine collapse, and he wants to know what exactly happened and whether this "accident" was actually a murder.

Chase Dunstan is his name, and when he enters Hope Falls he comes upon Creed, who he has worked with before in the past and knows that his real name is Jacob Granger. Dunstan has no idea why Creed has covered up parts of his past, but when the lid is taken off, so to speak, Evie still wants him for marriage while the other girls want her to hold off and see what else Creed/Granger may be hiding.

Lacey Lyman and Chase Dunstan are the focal point, however, as they begin to work together to find the truth and uncover things that Lacey’s brother, Braden, has also been hiding. Complete opposites, Lacey and Chase find themselves stuck with each other’s company; and, while trying to find a way to deal with the other’s odd personal traits, they also must fight the attraction that grows between them.

The plot is cute and charming, with a little mystery thrown in for good measure, and Chase Dunstan is certainly the type of rugged male any girl in the middle of nowhere would like to come upon, but to be honest, the best character is Dunstan’s cool dog, Decoy, who loves protecting Lacey and her pink-feathered wardrobe from preying cougars.

Quill says: A normal romance with no real surprises, but a good read for a rainy Saturday afternoon.