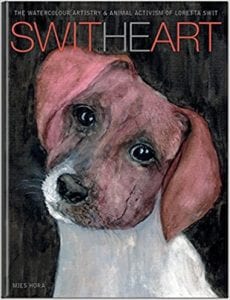 Loretta Swit's passion for animals, painting, and activism have been combined to create a beautiful coffee table book that is not just enjoyable, but will inspire readers to get involved in animal rescue themselves.

While Swit is widely known for her role on the television show M*A*S*H, many people may not know of her talent as a painter. Her memories of loving to draw and doodle reach back into her childhood, when, at six years old, she entered, and won, a magazine art contest. She notes in her introduction that her need for self-expression led next to books, where she'd devour each story and act out the characters' roles. From there it was a natural progression into acting, first in school plays and eventually into television and the role of a lifetime as Major Margaret "Hot Lips" Houlihan on M*A*S*H. While her career as an actress exploded, Swit never lost her passion for painting, nor her deep love of animals and of helping them through various charities dedicated to ending animal abuse and cruelty. Eventually, the love she held for painting and animals merged, and the artwork in SwitHeart is a beautiful example of those combined passions.

With over 60 full-color watercolors, SwitHeart is a treasure for animal lovers. The watercolors are gorgeous, and Swit does a fantastic job of capturing each animal's emotions and personality. Included with each is a brief synopsis of that painting by Swit, with a bit about the animal and/or what inspired her to create that painting. Dogs and cats are the primary subjects of the book, but there is also a nice selection of other animals including chickens, horses, birds, and even a couple of adorable pigs. As an added bonus, Swit is donating proceeds from the book to various charities "that are dedicated to ending animal suffering and cruelty."

Quill says: A lovely book that should be on your coffee table - Ms. Swit is indeed a very talented woman and deserves a big "Thank You!" for all she has done to help animals.