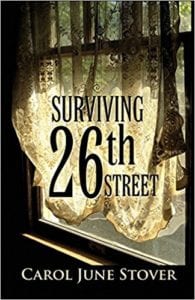 Carol June Stover's second novel, Surviving 26th Street, is a candid work of fiction that focuses on the life of 'good wife' character, Laura Justice. While she may be happy with her title of mom and homemaker, her dream is to do more. However, the only place for a woman in the '50's was in the home.

Laura Justice's life wasn't necessarily the life she envisioned. After college, she experienced her first taste of independence. When she reconnects with Winton Justice, the last thing she imagined was he would eventually be her husband. She couldn't figure out Winton's draw-the sex? Or maybe it was his attentiveness during their courting stage that hooked her. No matter, once married, they packed up their worldly possession and headed for New York. The year is 1954 and Winton's 'can do' attitude was all Laura needed to follow him to the ends of the earth.

In the beginning, Winton was everything a good husband and provider could possibly be. He secured the perfect nest egg for his growing family in the quaint northern suburb of Mayfair, New Jersey. After his New York based advertising business implodes, Winton wastes no time moving on to the next hair-brained scheme. It's 1954 and a warm summer day. Nine-year-old Jane Justice sits in the usual place on their front porch of their 26th Street home. She knows her job: eyes on five-year-old Denton, her brother, and wait for the shouting match between her mother and father to die down before going back inside. When Winton announces his next sure fired answer to reaping millions and that the scheme includes sloth-like Hubert Hubley, it's only a matter of time before constant chaos pays a visit to the Justice home front.

Ms. Stover accomplished the task of writing a book that (I imagine) depicts what it must have been like to be a woman/mother in the 1950's. There is more than a sublime message throughout her novel that delivers a distinct message of: Women of the 50's were permitted to covet a career, but the reality was they were destined for nothing more than rearing children and making sure dinner was on the table each night for their man. While the pace is quick, the storyline itself was a bit too predictable. There were too many passages devoted to character Laura Justice's subservience to her husband. However, Ms. Stover is spot on with her depiction of Winton Justice: cad and brute wrapped up in one package. He is a believable and credible bully of a husband. When Ms. Stover does come around to writing in a backbone for Laura Justice, without giving too much of a spoiler, I was disappointed with Laura's reaction when she learns of the egregious acts her husband Winton engages in with one of their neighbors. Again, this is a quick read and I believe it could be shortened some-currently 404 pages. I would encourage Ms. Stover to focus on dialogue and build around it in her next novel. She demonstrates a strong ability when it comes to writing dialogue.

Quill says: Surviving 26th Street is a good read for women to reflect upon - 'you've come a long way baby'!