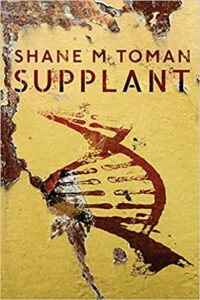 How far would humanity be willing to go in pursuit of scientific progress? Mik and Zen find out in Supplant by Shane M. Toman.

The year is 2071 and there is a serial murderer with poison frog genetic code on the loose leaving trails of dead girls in his wake. This process of genetic implantation known as Supplantation had once been the world’s most sought-after elective procedure. That all changed in the late 2040s when the world found out about the massive side effects on all offspring of supplanted people. The procedure was then criminalized.

Supplant follows several characters as they live their lives - lives which will all inevitably converge. Albert Murata is the CFO of Genovas, a gene-editing corporation on the verge of bankruptcy with crashing share prices. Professionalism and morals out the window, he lied to investors and eventually convinced the Genovas CEO to sign a human supplantation experiment with Correcticorp, the state prison system, the US Army, and the state of Illinois.

Mik is the only surviving member of the US Army’s 121st reconnaissance division, a division that had been created with all of its members supplanted with pit viper genetic code. He signed up for it for the sake of his father’s medical treatment but now that his father is dead and the 121st division defunct, the US military essentially forgot all about Mik. He is now a butcher’s apprentice who likes to hang out with his friend Ollie and drink in one of the dive bars that do not have any of the security sensors that could determine whether somebody’s genome has been implanted with a non-human genetic code. The trouble begins when Mik and Ollie are brought in for witness statements after they get involved in a barfight and Mik’s supplantation history is flagged in the system. With the help of Filip, the owner of the butcher shop where Mik works, Mik gets introduced to an underground haven of supplanted people.

Meanwhile, Zen is a security firm executive with a reproductive system issue and an abusive husband named Aidan. After one violent encounter that leaves Zen with a concussion and an imprisoned husband, a phone call from said husband leads her to look for information and ask questions that inevitably put her name on somebody’s hit list. With armed men on her heels, she crosses paths with Filip and eventually gets to join the ragtag underground haven. Together, they all work to put a stop to the unethical human experiment.

Supplant by Shane M. Toman is a plot-driven sci-fi thriller that started strong but began to fizzle about halfway through the story. In the beginning, the introduction of the various characters was effective, the dialogues were crisp, and the scenes engaging. However, as the story progressed, in the middle of the rising action of the story, the actions of the characters and the resulting sequences of events started becoming disjointed. The crucial scenes that would drive the plot were rushed and the dialogues became mundane. This story has a lot of potential and I think I would have liked it had there been a better-developed connection between the characters’ motives and their actions while at the same time, driving the plot to where it’s supposed to be. I have to say, however, that my favorite in this story is a well-written side character, an inmate named Jose, and all the sequences he was in. Jose, I’m rooting for you.

Quill says: Supplant is a story with an interesting premise on CRISPR technology in a Human Nature x Gattaca setup that starts out strong but fizzled halfway through.

For more information on Supplant, please visit the author's website at: shanemtoman.com