Summer on the Short Bus 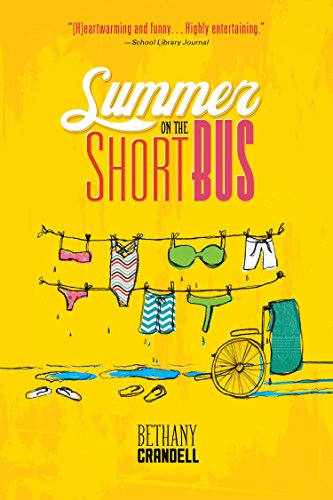 Summer on the Short Bus

A plush, no-worry, carefree life was all Constance Montgomery, aka Cricket, knew and that was completely fine with her. Unfortunately, her father decides that her behavior is no longer suitable and sends her to a summer camp where she is expected to work as a counselor. Of course, Cricket fights it every step of the way and from the moment she steps out of the car she is determined to find a way out of the horrible camp. Her negative feelings are intensified as she realizes this is not your run of the mill summer camp, but a camp for special needs kids! Instantly horrified, Cricket cannot fathom any way of getting through two whole weeks at this ridiculous place and to top it all off the camp director, Rainbow, is quickly becoming the creepiest person Cricket has ever met and she cannot understand why.

The only slight glimpse of hope is an extremely cute co-counselor named Quinn who could easily pass for Zac Efron. As her attempts to escape fail, Cricket slowly begins to think that spending time here may not be as bad as she first thought. Sure her two campers that she was put in charge of still freak her out at times but she is strangely becoming used to having them around. As she slowly gets to know the people at this camp, Cricket realizes that she in fact has been living in her own bubble and really has not done anything truly worth mentioning in her life. Finally deciding that she needs to change for the better, Cricket allows herself to grow into a worthier person. A person who realizes she should find a way to contribute to the world instead of believing that she is the center of it.

I absolutely loved every page of this book! It was amazingly refreshing to read a story that included special needs children who were not portrayed through rose-colored glasses. From the very beginning the writing had me laughing out loud as the author held nothing back and that was what made it great! Bethany Crandell creates a wonderful and relatable protagonist with Cricket but even better than that, she surrounds her with equally relatable, flawed, and real characters. One of my favorite parts of this book was hearing the story of each of the other counselors which allowed Cricket to realize that they had some of the exact same reactions when they first came to work at the camp. The quirky, fun, and spirited personalities that are shown by the campers are equally incredible and truly intriguing. This is one of the few times I have seen a story that spotlights special needs kids in this way and it took all of the “political correctness” right out of the picture and allowed the reader to see each character as the human being they were. I was truly impressed with this story and could not keep the smile off my face as I read every word.

Quill says: This book is an absolute winner!