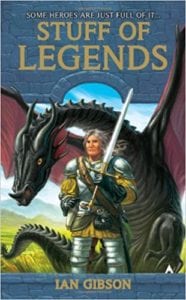 Fellow readers, every once in a while a book comes along that you know, will not only earn a permanent place on your bookshelf, but will also be one of those magical stories that you will recommend to as many people as humanly possible. This is most definitely one of those books.

The story centers around a great character named Jordan the Red; this man is a true legend. From far and wide, Jordan's fans clamor to "hear" of the next heroic adventure that their favorite "super-hero" has gone on. Jordan has had a lifetime filled with rescuing damsels in distress, pillaging the temples for the poor and downtrodden people, and facing the worst of humanity – man and beast – to become the savior to the world. Of course, he had to. After all, his talent agent set him up for all this in order to make him a star. The stories and sagas that bards have sung and told across the land about Jordan the Red have been told for decades. But...suddenly...things change. Now, the hero has disappeared…retired from his life of thwarting enemies in order to sit back, relax, and get in some fishing time.

Cyral is a young man who has worked very hard to become a bard. He’s gone through ‘The Guild,’ and even appeared before a panel of celebrity judges to earn the right to perform his own compositions as well as some golden oldies. However, one evening, when he's performing at The Ugly Crowd Tavern, he begins to get pelted with beer steins. The crowd is sick and tired of hearing about Jordan the Red; after all, the guy simply up and disappeared. And, although children still love hearing about him, the adults, quite frankly, want another superhero. As with all things in life, they want 'out with the old and in with the new.' Cyral needs to find another hero to write about, and fast, so he heads off to a talent agent in the city who will perhaps supply him with one in order to create his own epic stories that will live forever.

In addition to the retired hero and the traveling bard, we are also presented with a young man named Eliott. Eliott is celebrating his fifteenth birthday and his best friend, Kess, has just given him a fantastic gift. Now, Kess is an elf; she was first hired by Eliott's family to babysit him and tell him stories before he went to bed. Her favorite stories were, of course, about Jordan the Red, so Eliott grew up on the fact that Jordan was the end all and be all of heroism, and he's wanted nothing more than to come face to face with the man he's put on a pedestal. The fabulous gift Eliott receives is called a Magic Braid - a toy that is composed of three threads used to make three wishes upon. Big surprise, his first wish is to find and travel to Jordan the Red – his hero. Soon Kess and Eliott arrive at Jordan the Red’s retirement home and Jordan – disgruntled because he REALLY wants to be left alone – allows them the day to sit in his house and read his diaries while he goes fishing. He hopes beyond all hope that will satisfy the young man and his elf so that they will leave him be.

While in Jordan’s home, however, Eliott comes across a strange object that, when he touches it, transprots him to Glister Starmacher’s office. Glister was Jordan’s talent agent and has been trying with all his might to find out what happened to his favorite star. Together, and with the help of Cyral the bard, they set Jordan up for a new adventure. Resurrecting a “bad guy” whose claim to fame is the fact that his family was once famous for their baked goods, this old wizard wants nothing more than to be known forever in the history books as the evil one who brought Jordan the Red to his knees – instead of always being known for the fact that his muffins are very tasty. When the old “Martha Stewart” wizard kidnaps Eliott, Kess and Cyral draw Jordan into the adventure. Even though he's only there to supervise; Jordan makes it clear as day that he wants nothing more to do with heroism, and he refuses to be pulled back into that world. Thus, the adventure begins!

I have not read about a 'world' so entertaining and unforgettable since George Lucas brought Star Wars to the masses. Although a completely different concept; Jordan, Cyral, Kess, the elf...all of these characters have found a place in my heart right next to Han, Chewie, and C3P0. Not only is this book stacked with a great adventure, but the sarcastic words of Jordan the Red - a hero who is sick to death of being replaced by the young up-and-comers who, frankly, couldn't save a damsel in distress if they tried because it would ruin their hair - absolutely had me laughing myself right out of my chair. Not only that, but the bad guy - muffin man turned evil wizard - was one of the funniest characters that I've ever read about (and, trust me, I've read a LOT of books). Anyone interested in humor, fantasy, adventure, science fiction - every reader, in fact, who's not looking for a WWII memoir - will absolutely find this book a joy to read.

Quill says: There are not enough letters in the word hysterical to sum up the plot, the presentation, or the fantastic characters that this author has put on paper. The locations that Ian Gibson has created will make all who read the book long for the time they can see it up on the big screen. In fact, in my opinion, this is one novel that should be headed into theaters as fast as the new "George Lucas" can get it there. Readers will not be able to wait for the next adventure. I, for one, laughed until I cried - and that's an understatement.