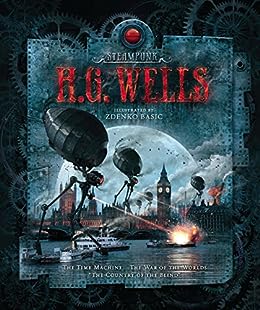 I love the classics! And I have to say that H.G. Wells is near the top of my list of best “classic” authors to read. Alas, if you mention his name to many youngsters, their eyes glaze over. “Who?” Mention “that Tom Cruise movie with the aliens who try to take over Earth,” or “remember the movie starring Guy Pearce where he invents a time-traveling machine,” you just might get a response. But the actual stories? Nah, haven’t read those. Enter Steampunk’s new H.G. Wells book and you just might get those kids to pick up a book and get lost in a good classic.

I firmly believe that it is very important to get today’s teens to read the classics but most of the books offered to them are dull and, honestly, lacking imagination where the layout is concerned. This may seem like an irrelevant thing – the story is great! – but so many youngsters are visually attuned and with tiny, boring print, they quickly lost interest. That’s where “Steampunk” (a sub-genre of science fiction), combined with amazing illustrations, comes in and I’m thrilled to see that these books are proving popular.

The third in a series that takes stories from this sci-fi subgenre that, set in Victorian England, “reimagins” the machines/technology of the day, these H.G. Wells stories come to life like they never have before. Illustrator Zdenko Basic is the perfect artist for this genre. His illustrations (and there are a lot in this book!) are detailed, imaginative, and just plain cool. They demand to be studied and enjoyed.

The three stories selected for this book are The Time Machine, The War of the Worlds and The Country of the Blind. The stories in these books is the original, unabridged 19th century text and will likely offer a few challenges in the way of language. But with those fascinating illustrations mentioned previously, kids just may not notice they’re being challenged because they’ll be lost in a great story.

Quill says: Bravo, Steampunk! Bravo, Zdenko Basic! Even reluctant readers will want to read H.G. Wells now and get lost in a classic!