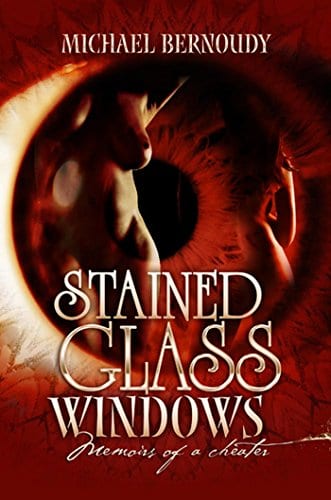 This memoir is divided into six sections, each representing an important stage in the author's life.  From "Loss of Innocence" through the final "Hope for the Future," these sections take the reader through a vast array of experiences and events.  Within each section are chapters, all named for women who have been a part of Mr. Bernoudy's life - relatives, teachers, his much-loved three daughters, wives (yes, more than one), as well as a long list of lovers.

Mr. Bernoudy begins his story with his earliest memories - "...the happiest times in my life, when it was just my mom and me."  His parents, both Vietnam vets, were not a well-matched pair and there was tension in the marriage.  Because money was tight, Mr. Bernoudy's mother went back to the military and this led to feelings of abandonment.  He spent time with his father, and then his grandmother, but like any young child, he missed his mother.  This sense of longing for his mother, desiring closeness and yet not getting that much needed contact, the author explains, would have a profound impact on his own future relationships with women.

The author next moves on to his life in Lewisville, Arkansas (having moved from Los Angeles at the age of five or six).  As a city kid trying to adjust to life in a sleepy southern town, there were challenges met and struggles to overcome.  For his last two years of high school, Mr. Bernoudy became a rapper and his group actually made an album.  But it was the trouble he got into, and the fighting, during those final years of high school that got the author expelled.  It was R.O.T.C. that saved the young man from trouble and within the walls of the R.O.T.C. building where he felt he belonged.

As the pages turn, Mr. Bernoudy shares many events that other writers might hesitate to share.  He tells of the time his friend Dell brought two very hot young women to his house.  Dell soon left again, taking one of the girls with him.  Mr. Bernoudy and the other woman had a wild night and it wasn't until several days later that he learned the girl was underage.  He was arrested and was soon a convicted felon - he was now listed as a sex offender.  This had a ripple effect on his life; keeping him from going to law school and getting him discharged from the military.  But the author continued to struggle onwards and he did eventually get that law degree and not only practice law, but have his own law firm.  Along the way were lessons learned, woman dated, and career choices made.

Stained Glass Windows takes the reader through a whirlwind of emotions as the author shares his deepest desires, wants, and needs throughout the book.  With 37 chapters, there are a lot of women and events chronicled in this memoir.  The intimate scenes, and there are many, are not overly explicit, because the author is focusing on the relationships rather than the physical events.  While many of the women chronicled in this memoir only appear for a few pages, and thus it's hard to get to know them, the author does a nice job of bringing to life several more prominent women, such as Mona, his wife, then ex-wife, a woman who moved out a total of twelve times.

When I received this book for review, I admit that I thought a memoir of a cheater wouldn't be to my liking, but I was pleasantly surprised to find myself drawn into the story.  Mr. Bernoudy has a knack for writing as though he is talking to a friend over drinks at the local bar, sharing stories of his life.  The story had a nice, easy flow and was an interesting read that left me thinking about how a few life choices can alter everything to follow.

Quill says: A very personal story that entertains while also providing a cautionary tale of one man's mistakes.

For more information on Stained Glass Windows: Memoirs of a Cheater, please visit the author's website at: www.mikebernoudy.com