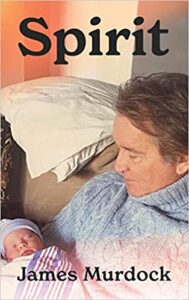 A deep dive into the human bubble with a cadre of impressive imagery and genuine flair of originality, Spirit is a gala for the spirit and the heart.

Voyeuristic in all the right ways, the poems reflect upon themes such as faith, freedom, loss, love nature, war, and self-discovery. Some poems are long traversing multiple pages such as Ashlyn and Maddie, Wave, Howie, and the Gettysburg Address as others come across as just a few lines such as Atheist and the Believer and Spirit.

Often, Murdock explores the fundamental poetic technique. In Wind, for example, visual imagery dominates. Elsewhere, he offers readers kinesthetic imagery with words such as “I began as a ripple with a thousand miles of fetch before me. The power pushes me bigger, higher, faster, barreling toward where I know I will die.”

In other collections, meaning accrues through repetition creating an intoxicating pattern through the rhythm. In Wall, for example, the repetition present heightens the poetic effect. Further, the entries meditate upon life's musings. In Shooter, for example, the poet condemns some of society's evils such as gun attacks. He takes a stand with words such as: "Take that gun away and he has left the wretched little man he was before he got that gun in his hand."

In others like Maddie, the warmth and joy that surrounds an innocent newborn is heartfelt. Murdock juxtaposes this with entries such as Body Count and Death by Drone whose subject is predominantly on the horrors of death. This alteration of serenity and sadness creates a complex realness that cross-examines, impedes, and edifies. The poems deal with familiar objects, scenes, imagery, principles, and viewpoints in adept creativity that define all human realms including the struggles and successes.

The anthology is schematically titled, bearing subjects that are suggested by their titles. The anapestic tetrameters and line alternation that appear often across the pages provide varying rhymes resulting in distinct clarity and cohesion. While some appear to be narrative poems such as The Girl in the Road, others convey a journey of emotions such as joy, disappointment, pain, heartbreak, and hope. Together, they work to demonstrate James Murdock's enthusiasm and skill for his craft.

Multiple poems invoke tenets of unabashed social justice as a path towards liberty and authenticity. Spirit is truly a breath in experience. They cry to be read out loud, to be set free in readers' mouths where their shine will not be stolen. Further, the lines move like a wild tangled forest, with treasures concealed within. There is something for everyone along the pages. Murdock's work is a deft portrait of the power of poetry to inform, instruct, caution, and guide. The quietly powerful and pensive soliloquy present in some entries further provides a safe platform to reflect and ponder on the subject herein.

Quill says: The masterstroke of this piece of art by James Murdock is the whip-smart clarity of the climactic discourses that make for a nuance-filled experience.