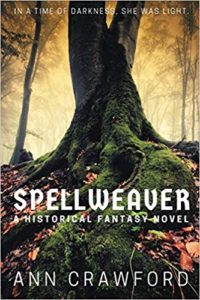 When it comes to the fantastical, author Ann Crawford yet again lets her imagination run free as she introduces readers to a young heroine, a diabolical fiend, a heartwarming village, and those who can be manipulated by a devious mind.

Her name is Catriona: a stunning Scottish girl who seems to have the sun emanating from her at all times. Catriona’s hair glows like copper fire, and she is the one who villagers absolutely love to speak with because of her undying charm and passion for life. She is also the older sister of Elspeth – a young lady who does not speak a word. She was said to have chattered all the time when she was just a babe, but when their mother died after having never quite recovered from childbirth, Elspeth stopped uttering a word. The girls have no clear memory of their mother, but their father turned from a leader of the village that was held in high-esteem to a man who still holds the title of leader, but was so hurt by his wife’s death that he became nothing more than a drunk. He also held anger and hatred in his heart for Elspeth, blaming her for his true love’s death.

In this village there is one who despises Catriona, but only because he absolutely wants her to become his own wife. He goes by the name of Shane, and the only way Catriona has figured out how to deal with him is to be the kindest person she can be while Shane is around. Her voice never rises in anger, with anyone, and she basically spends her days picking plants growing on the mountainside that come in handy for the villagers. You see, Catriona is a Wiccan healer. Although many still classify Wiccan as being witches and warlocks who are out to damage and harm life, Catriona is a true Wiccan—out to protect people by utilizing her knowledge of herbs and remedies in order to help those in need feel better.

There is darkness on the horizon of this small Scottish village, however; there are strangers bearing down on their land. One is a witch hunter. Dressed in black, he and his attendant are coming towards the village for a very important purpose, to call out a true “Spellweaver” and burn her at the stake. The other man coming closer to them is on his own journey that does not involve darkness or pain. He hails from a familiar land that the villagers (and readers) certainly know about: Glastonbury. His name is Byron, and he has been traveling for almost a year. Although he has stopped in many a town along the way, no others have played home to a young woman, such as Catriona, who steals his heart in the very first moment he lays eyes upon her.

From romance to deception, this tale holds on to the reader and never let’s go. Not only are the characters and subplots intoxicating, but this story is also told from five different perspectives, with the book being broken up into the elements: earth, air, wind and fire. The addition of the fifth, being ‘love,’ rounds out the elements. Here, the magical exists. Here, the fantastical is normal. And it is here, where you are guaranteed to lose yourself within the pages.

Quill says: All that can be said is that the author has cast her own remarkable “spell” upon readers with this unforgettable tale.