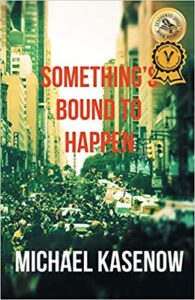 Kasenow's latest wordsmith collection speaks to the issues of life.

A mix of previously published poems (Six Feet Down) and a flurry of new compositions, Something's Bound to Happen includes a little bit of everything—sufficient to whet the literary palettes of poetry aficionados. Kasenow's collection of over 100 poems covers a wide range of themes about life. Combining a full array of personal reflection, observation, and plenty of creativity, Kasenow's poems are a timeless tapestry that weaves in the past and present—a presentation of provocative words that will keep readers ruminating long after the completion of the book.

Award-winning novelist and poet Michael Kasenow is a living, breathing miracle. As stated in Kasenow's website, "He [Michael] is a survivor of an abusive and brutal childhood. Embarrassed as an adolescent because he couldn’t read or write, it was in the eighth grade when he would 'slip away from his friends' into the middle school library to read poetry." A determined self-educator, Kasenow chose to follow the "road less traveled," beating the odds that generally fall upon kids in horrific abusive and drug-related environs. Earning a doctorate in geology, Kasenow now teaches hydrogeology at Eastern Michigan University. Although established "as an innovator in the field of groundwater analysis, developing new pragmatic equations," Kasenow had to sever his past to get where he is today.

Prior to embracing higher education, Kasenow traveled across America. Living "among a variety of unique personalities—the enchanted, the mystical—vagabonds, drifters and an occasional thief,” Kasenow gathered together a multitude of his experiences and turned them into poems. The end result adds "a level of authenticity to his written work." That said, for an appropriate starter, Kasenow sets the mood by opening with a poem on opposing viewpoints ("The Great Absurd"), which he lightly revisits in a later work titled "The Affluent Avenue"—one out of a good handful of poems centered on materialism. "Paradise" and "The Great Divide" are other good examples that incorporate a materialism-based theme.

Unafraid to tell it like it is, at the forefront of his collection Kasenow speaks about life and death issues. Beginning with his abusive upbringing and the shadow of death that hovered over many of his friends, great examples can be found in "Abuse," "You Can Sleep With Me Any Time You Want," "My Friends Are On Heroin," and "Straightjacket Blues." Kasenow's life/death themes are not limited however to his upbringing as he pens a heart-wrenching read about a father who is grappling with the impending loss of his son in "Zachary." On a lighter note, Kasenow draws attention to the issue of aging in "Twenty Years." Keeping to a refrain-styled format, Kasenow's stanzas are reminiscent of Paul McCartney's lyrics to "When I'm Sixty-Four."

While sprinkling in a flurry of poems centered on love and relationships (i.e., "Love Gone Bad," "Where Did Jenny Go," "Summer Tent"), Kasenow shows his cynical side as he pokes fun at religion. "The Saint's Cafe" and "Jesus Answers Pilate: Show Me a Miracle!" are prime models. Although these poems are laced in mockery, Kasenow is concerned with how everything will end as he touches upon politics and nature/environment in many accounts, especially in his poem with the same moniker as the title of his latest read. Kasenow aptly closes on an end-time note with "Six Feet Down"—also the title to his first book of poetry.

Quill says: A stunning opus, Something's Bound to Happen is nothing less than thought provoking.

For more information on Something's Bound to Happen, please visit the author's website at: michaelkasenow.com